For about one week, my bicycle was having a serious problem with the lower gear shifting and the rear wheel was once again a bit wobbly. After searching for a while I found a bicycle shop in Samarkand today, but the mechanic told me that he would not be able to fix the gear problem and that I should go to “Valodiya, The bicycle master”.

After asking directions a few times, a shop owner directed me to a narrow street which led to the back entrance of the “Dinamo Stadium”. The gate-keeper opened the gate for me asking, “Valodiya?”. I said yes. “He must be famous!”, I thought to myself. 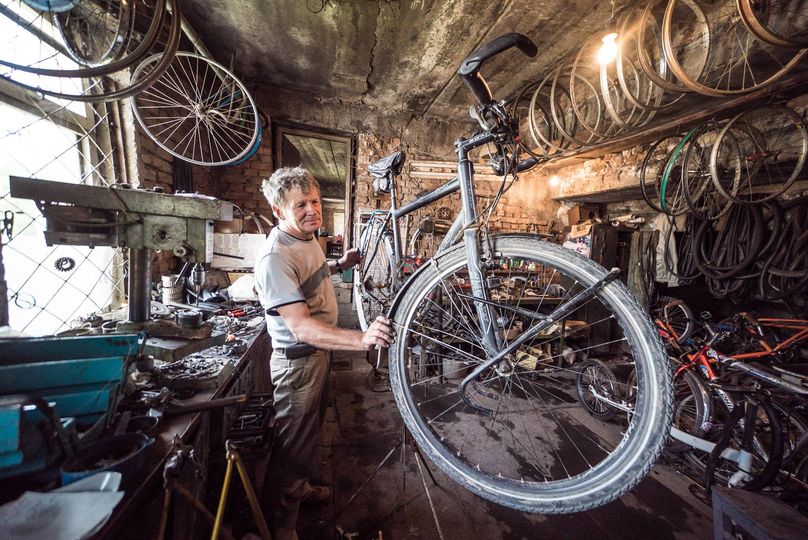 After crossing another gate, a blue-eyed gentleman appeared who asked me to bring the bicycle in. Inside, there were no bicycles, but a pile of bricks and stairs going up. We climbed stairs which led to to his workshop located on the first floor.

The gentleman first straightened the rear wheel, replaced the chain with the one I had bought in Mashhad, fixed the gear shifter, mounted the mudguard, tuned in the brakes. The whole process took about two hours.

Upon leaving when I offered to pay him, he refused to accept the money for his service. He even came to see me off on his bicycle, leaving me totally speechless. All I could say was a big “Thank You” from the bottom of my heart.

I hope the bicycle is now able to hold on during the upcoming and critical ride in Tajikistan.