An hour ago I was looking out for a place to eat in the empty street here. All closed because of being late at night. I asked a passerby for some restaurant. He spoke only Romanian. So we talked in sign language. He pointed towards the end of the street and gestured that he would walk me to the restaurant. On the way he was talking and talking, and making strange gestures. I understood nothing.

He was about 30 and slightly limping. I could smell beer from him. Once he shouted to stop a taxi which alarmed me. Then I remembered a conversation with an elderly women today. She had warned me that in this city exists a big mafia. It gave me goosebumps. I immediately parted my way and asked him leave me alone, but he stalked me for 20 minutes through different streets.

When I paced he would start running and catch up with me. Finally I had to stop and shout at him, “go otherwise i will call Politia!” He still didn’t stop, I crossed the street but he stalked me from the other side of street. Later I found an Italian restaurant and ate pizza. On the way back to hotel I looked back and still could see him in the distance and then hiding behind a tree (look photo). 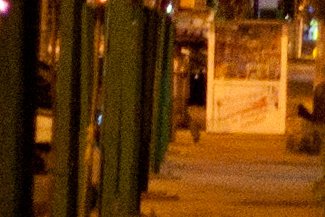