As I cross the gate I feel as if I have entered a concert arena and suddenly someone has turned the volume up on my arrival. I close my eyes for a moment and as I slowly open them I see million dots of light flicker and sway left to right in different rhythms. Instead of seeing the raised hands of the crowd holding candles or waving phones in a concert there is a sea of tombstones spanning as far as I can see. A soft golden light wraps itself around the graves adorned with crosses, marigold flowers, sugar skulls and photos. The air is thick with the smoke and incense of copal and wax candles. I raise the camera to my eye to compose a picture and notice an isolated white dot above the sea of warm light. It is the half moon in the cold blue sky looking like a homeless man standing outside in the cold staring at the fire from behind a glass window to catch some warmth. 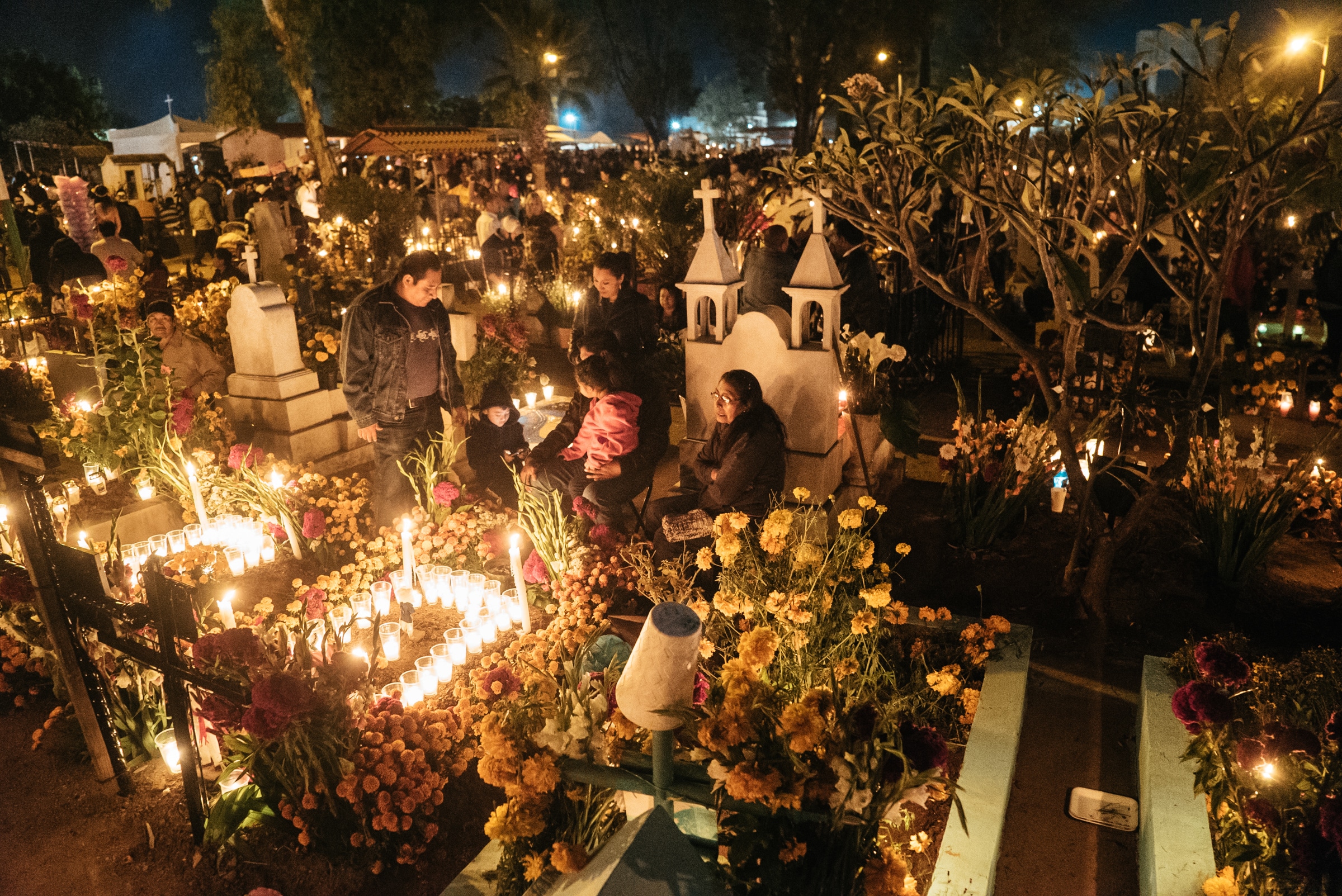 The noise is as deafening as in a disco but here several songs are playing at the same time. The genre and the volume of the music are different too. In one corner an old woman listens to the classical music on a tiny radio, whereas just a few metres away, a couple wearing light up bunny ears headband is dancing to the screeching sound of the pop music. Nearby, a group of musicians play sad romantic songs, with giant tuba producing groans which are enough to make the dead turn in their graves. 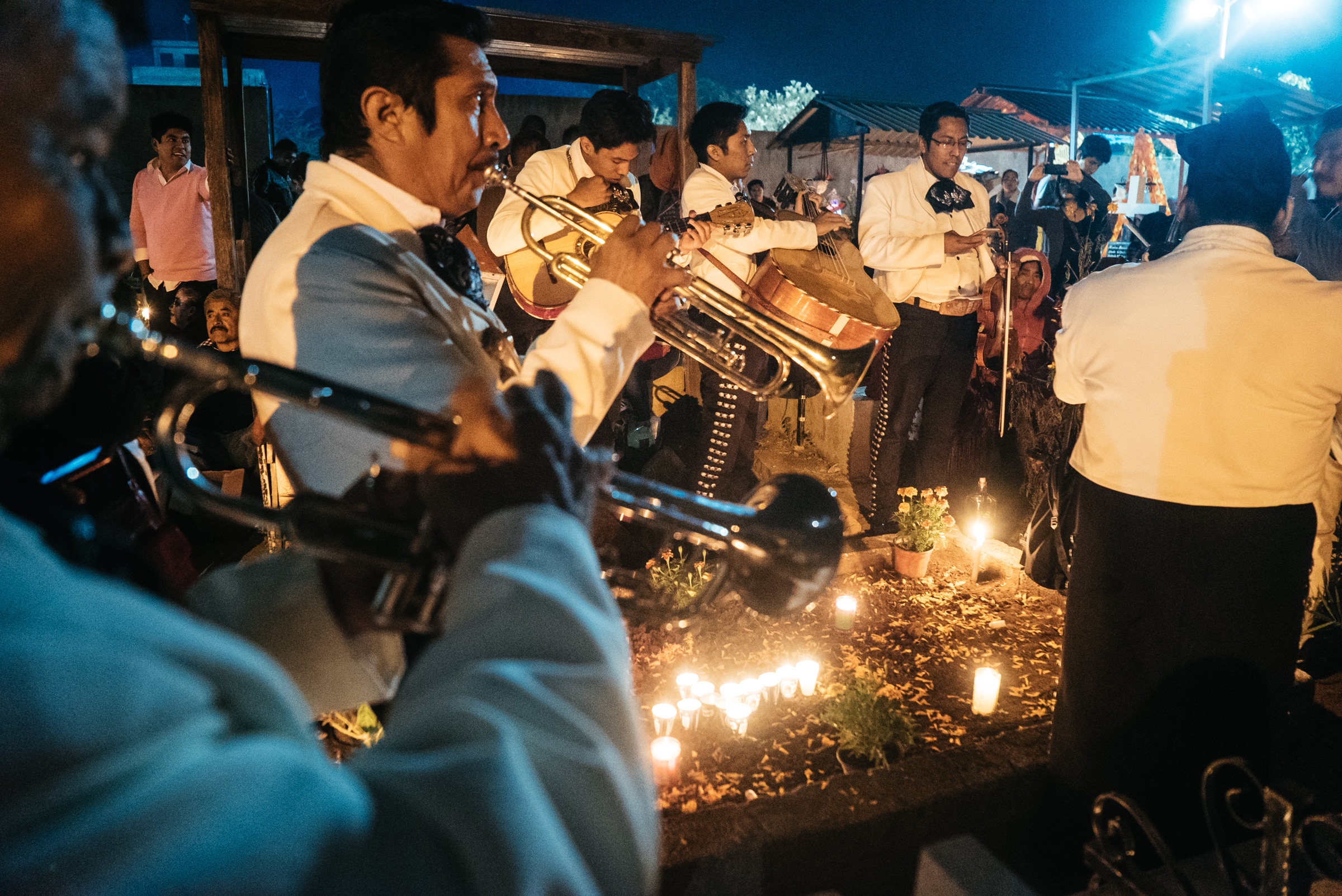 This is the night of the Dia de Los Muertos (Day of the Dead) at Xoxocotlan cemetery in the south of Oaxaca in Mexico. While in most cultures, visiting a graveyard is a morbid and a sombre occasion, in Mexico it is a joyous celebration honouring the dead. From 31st October to 2nd November, Mexicans visit cemeteries, decorate the graves of their loved ones with flowers, candles, photos and memorabilia to honour the deceased. They believe that on the Day of the Dead the souls of the dead return to the world to reunite with their families. 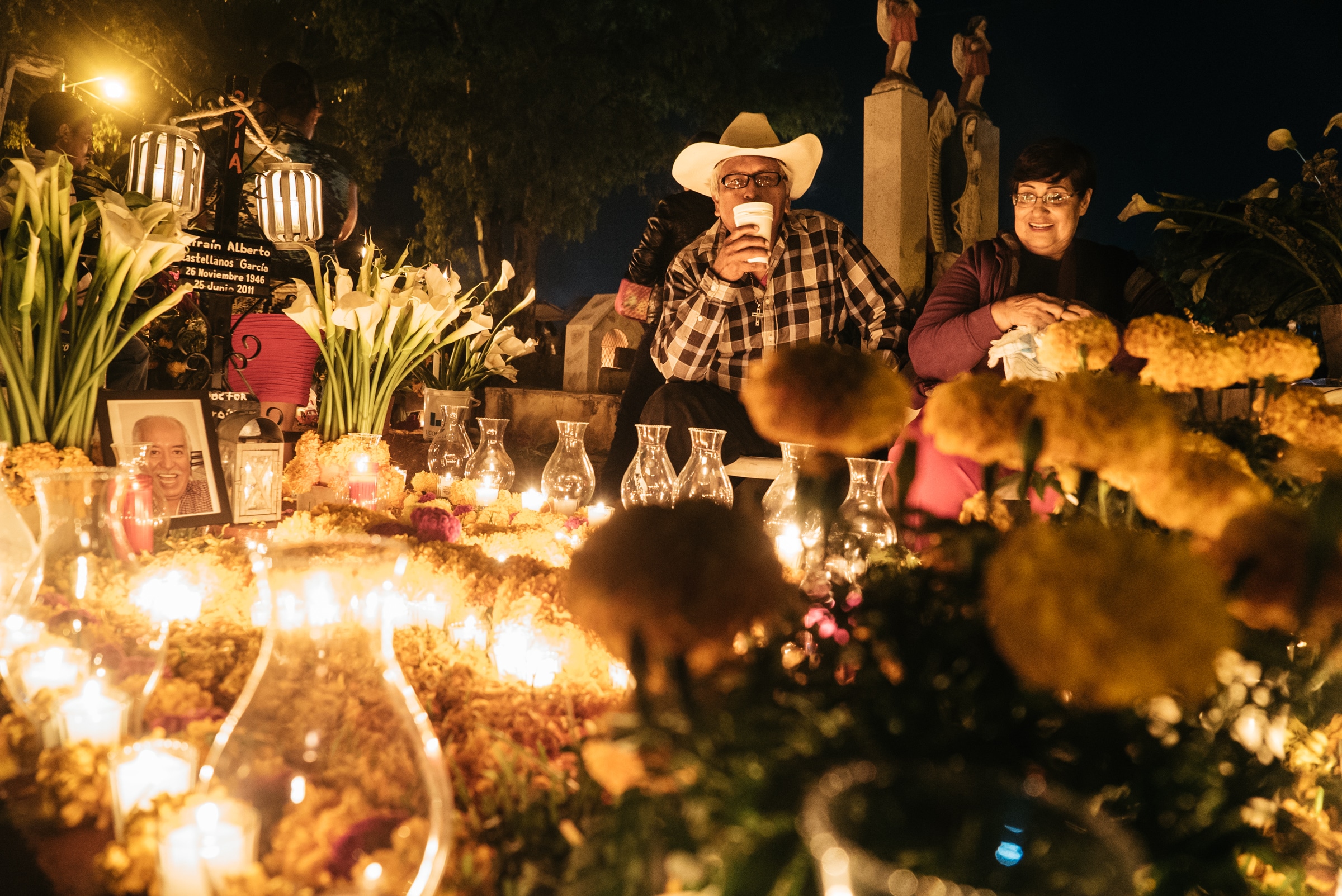 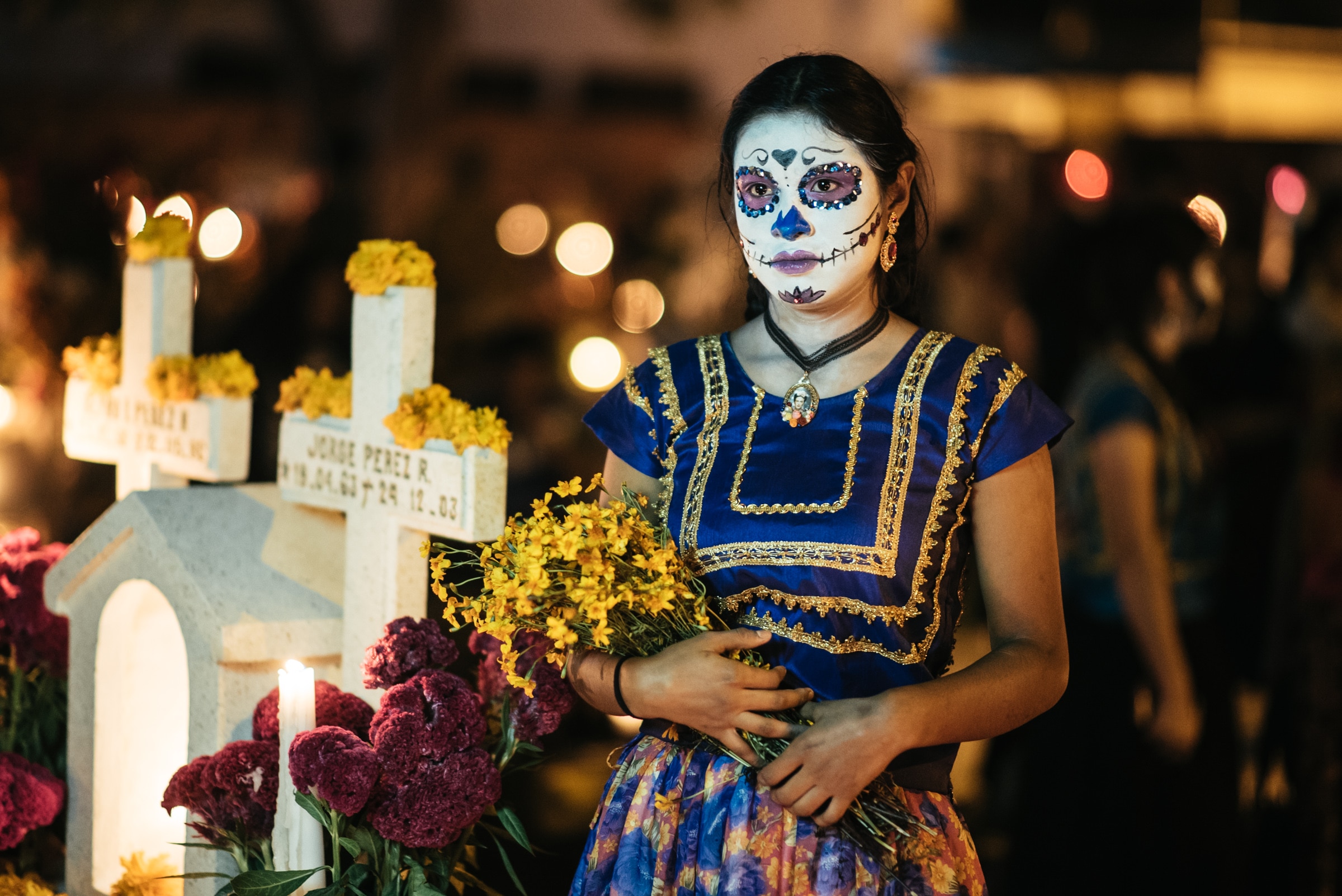 The history of the Day of the Dead goes back to the pre-Hispanic era. The native Americans used to perform rituals celebrating the deaths of their ancestors instead of mourning for them. After the Spanish conquest, they incorporated Christian practices into their beliefs. The modern Day of the Dead practice is influenced by All Souls’ days from Christianity, a day which commemorates the dead, but combines it with a festive feel. It is believed that the spirits of babies come on 31st October to spend a day with their families and the spirits of the adults arrive on 1st November. 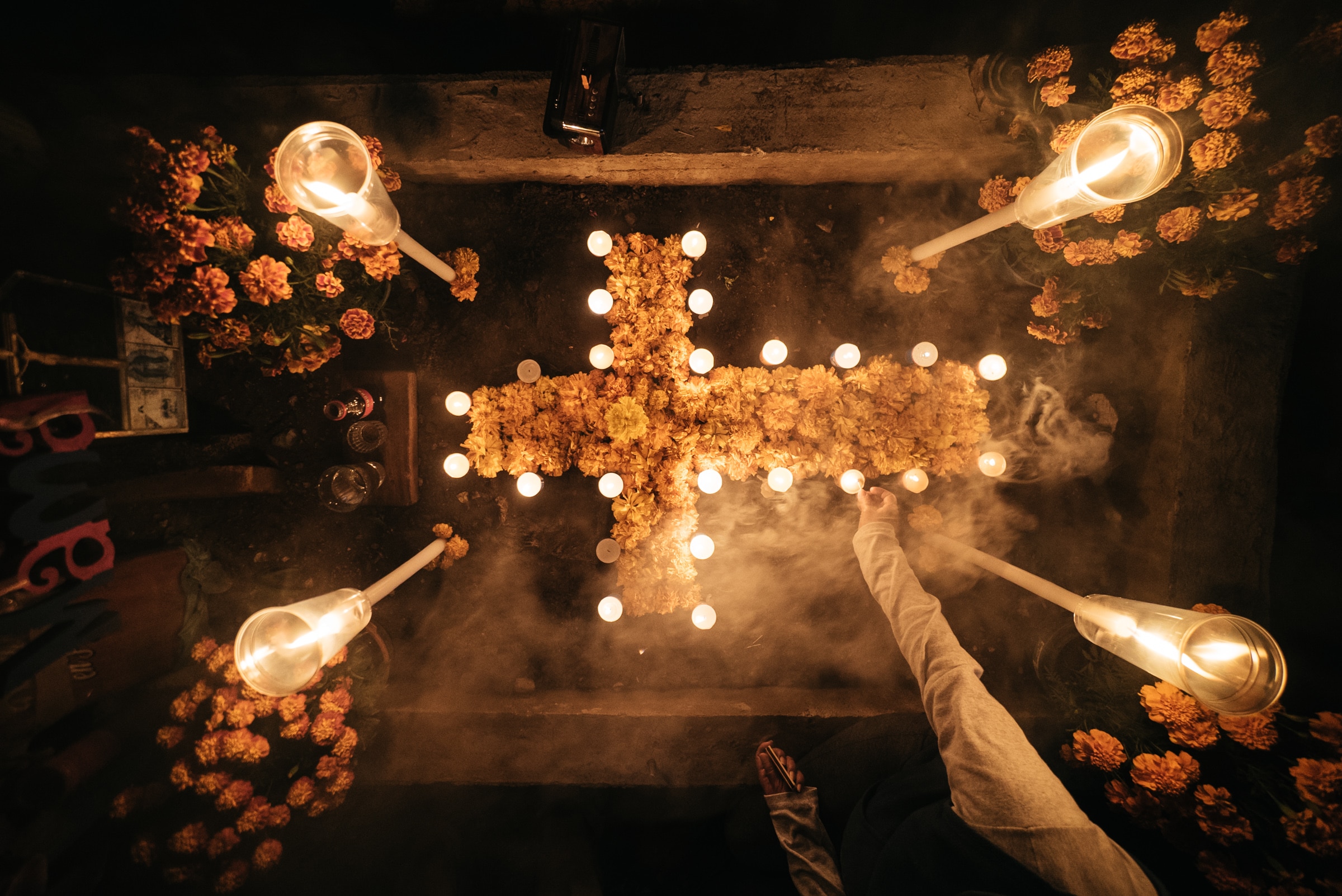 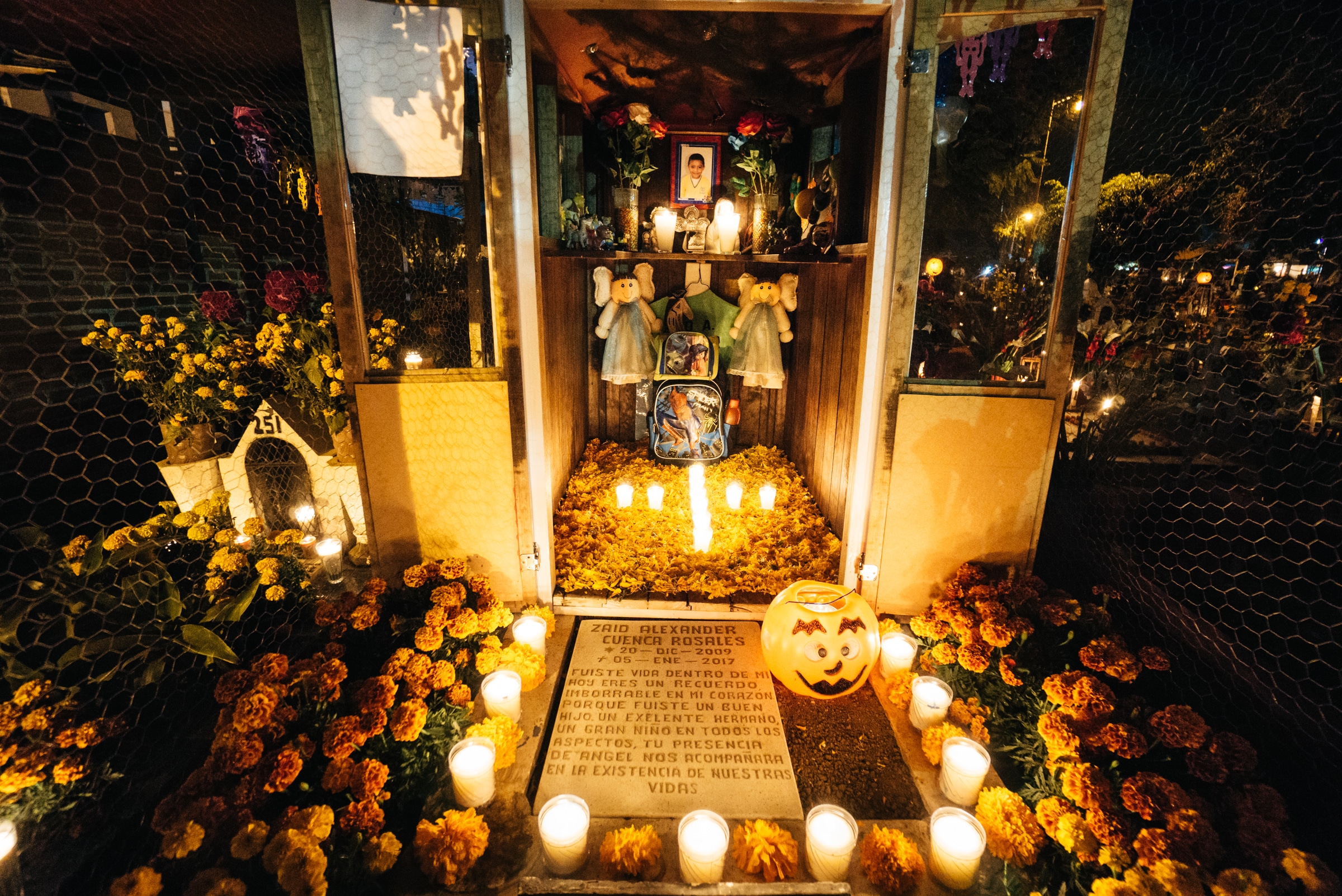 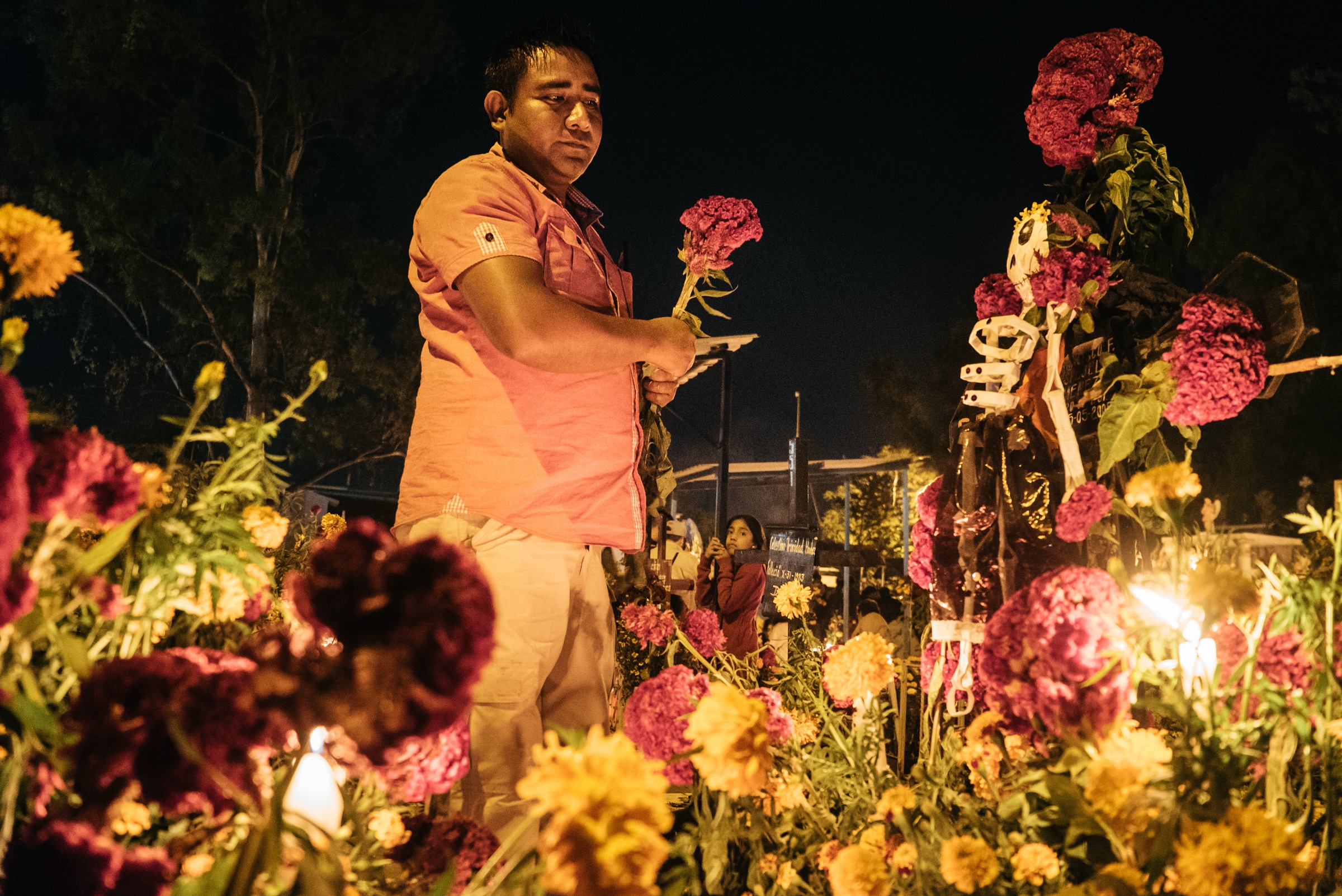 Families build altars and shrines in their homes and decorate them with offerings, sugar skulls (Calaveras), fruits, Pan de Muerto (bread of the dead) and beverages. There is a lot of symbolism attached to the offering. Water, coca cola, tequila and mezcal drinks are placed on the altars and next to graves to quench the soul’s thirst. Candles are lit to guide the spirits on their journey back to the world. The decorative skulls symbolise the cycle of life and death. People also paint their faces to look like skulls. In Mexico, marigold flowers are considered as Flor de Muerto (flower of the dead). They are believed to attract the souls of the dead to the offering that’s why people decorate graves with plenty of marigolds. 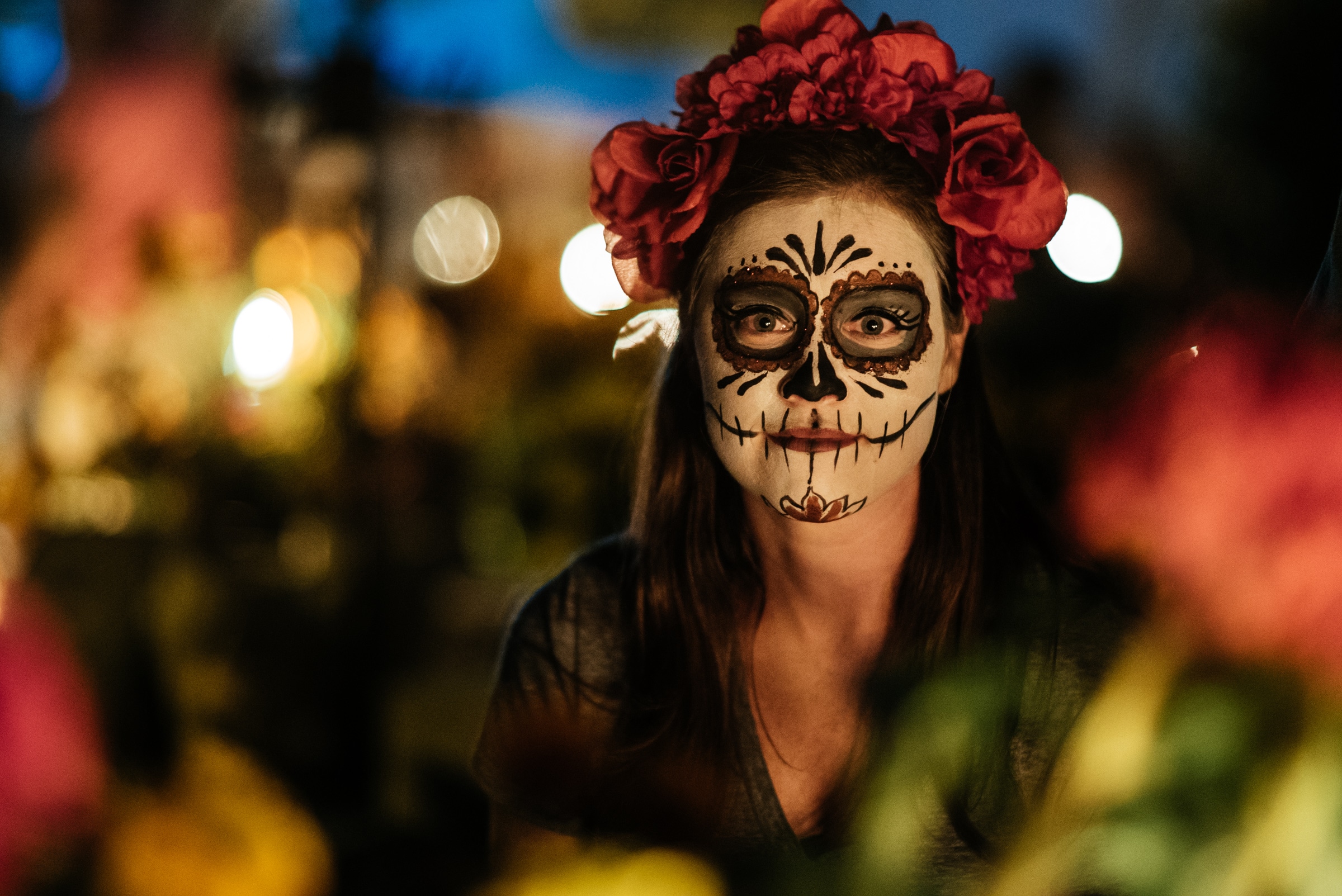 It is common for families to spend the whole night in the cemetery and they make a full use of it by having a party. They play the favourite music and eat the favourite food of the deceased, and remember funny anecdotes about them. They bring musical instruments with them or can invite one of the many bands present at the cemetery that night to play live music at the graves. The intention is to encourage the departed souls to visit the families. Due to its significance in the Mexican culture, the Day of the Dead has been declared as a UNESCO intangible cultural heritage of humanity. 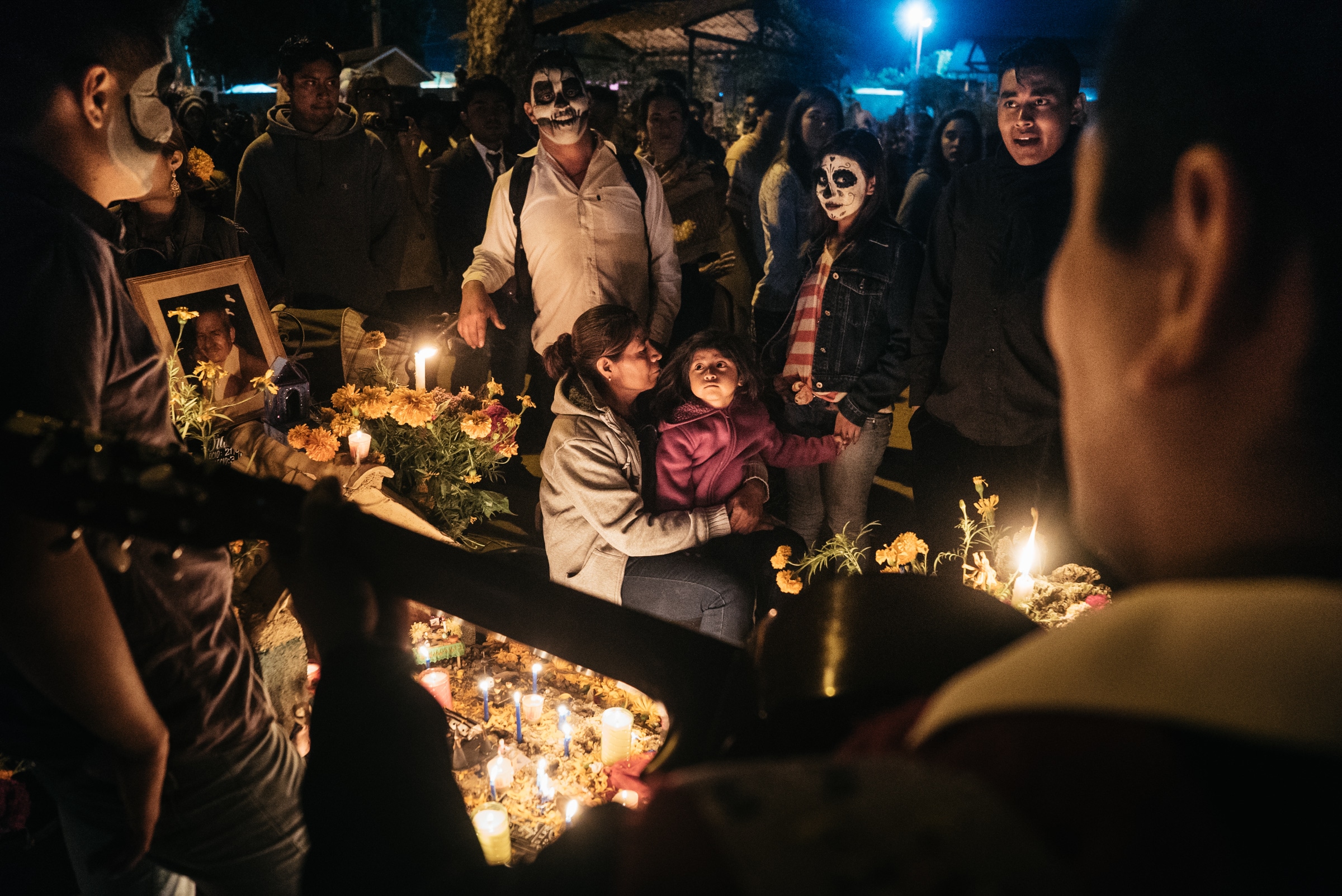 As I pass through the narrow passageways, I hear, “mezcal?” I turn around and see a man in forties extending a glass to me. “No, gracias!” But I sit down to spend some time with them. His sons are playing the guitar and the whole family is singing songs at the grave of their ancestor. The grave is beautifully decorated. People come take pictures and leave. Everyone is invited to share a drink with them. 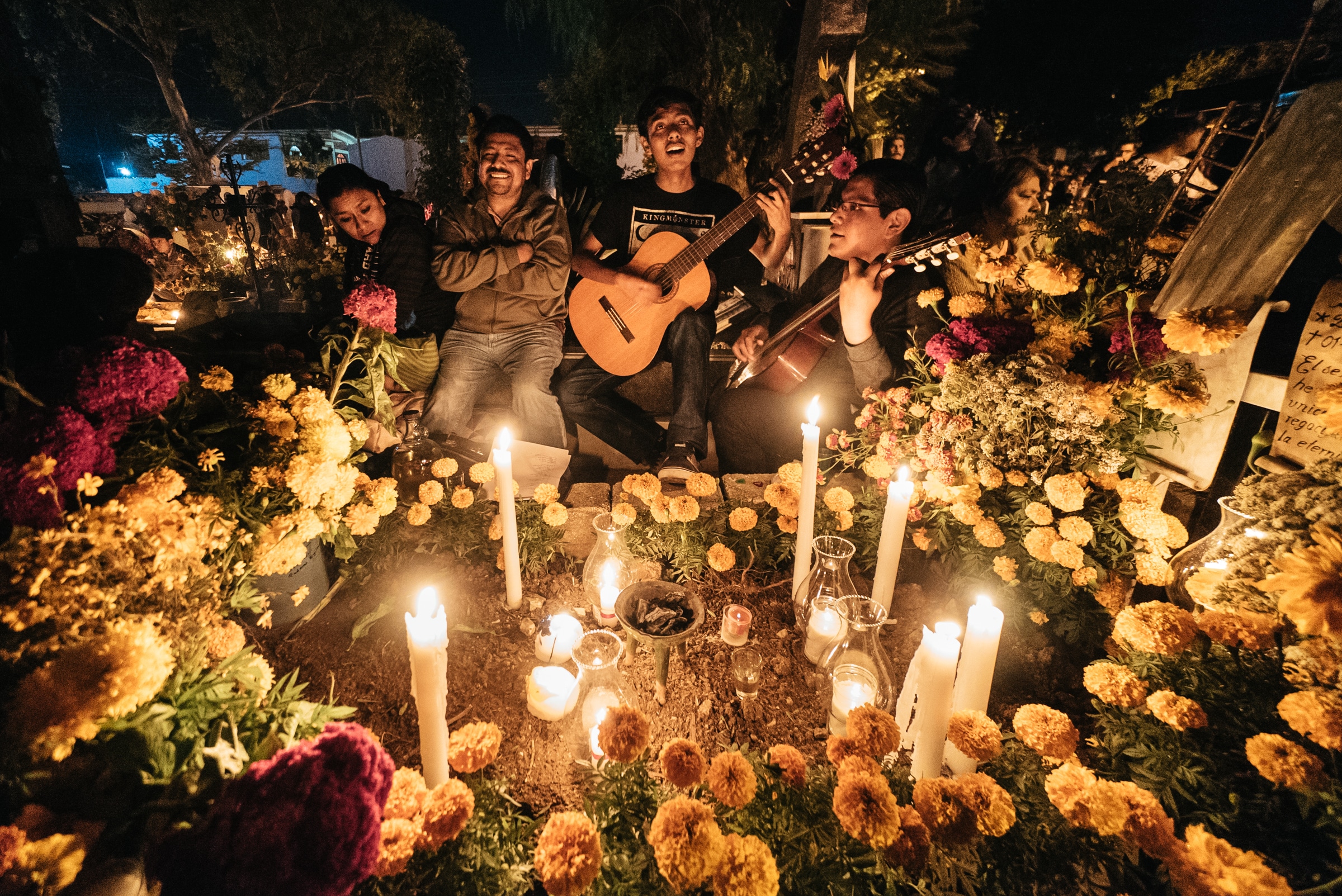 Dia de Los Muertos has some similarities to Halloween but both are distinct in their belief. According to both, the spirits return at that time of year. Whereas the idea behind the Halloween is that the dead are to be feared, in the case of Day of the Dead, the souls of the loved ones are to be welcomed as their living family members haven’t seen them for a year. 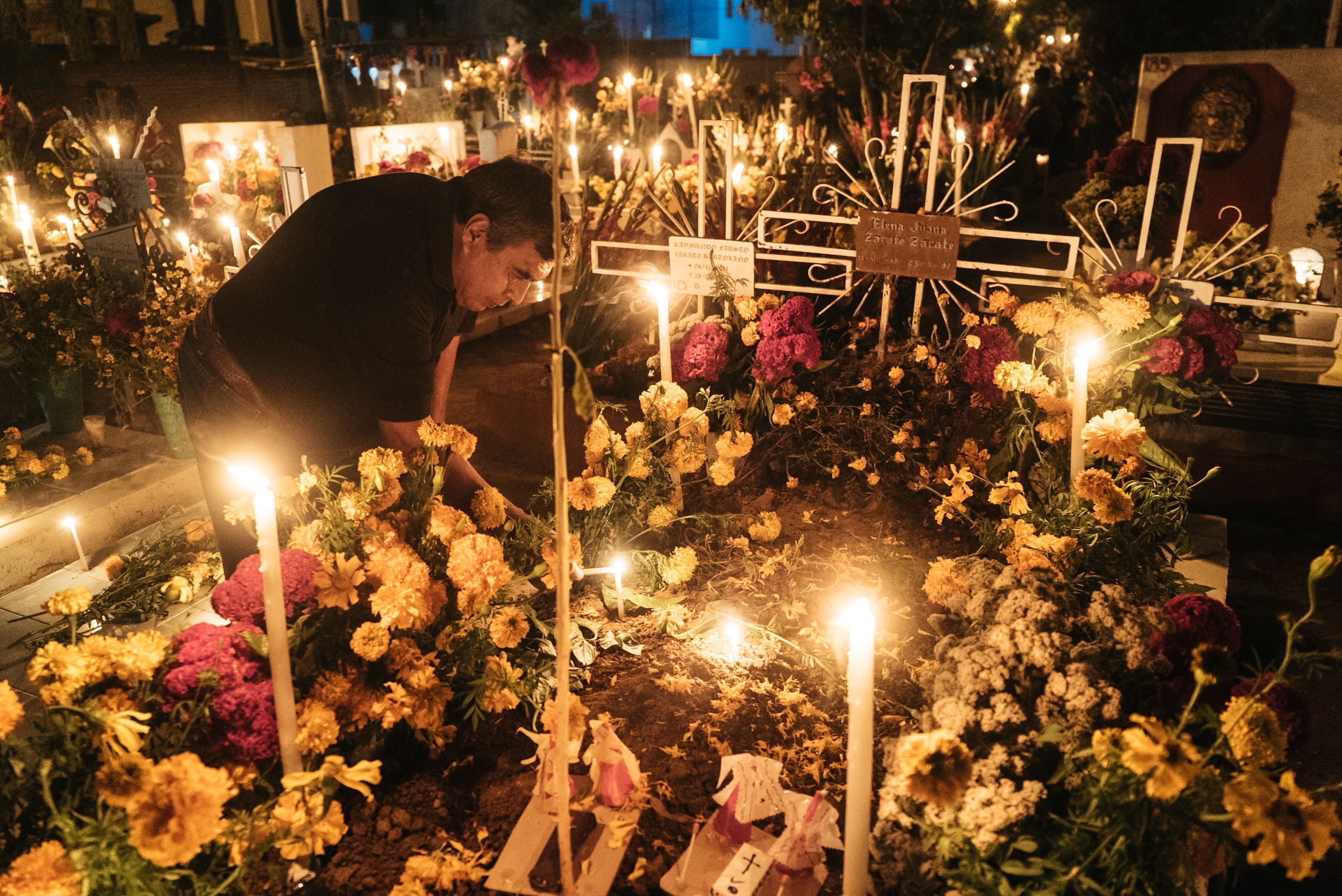 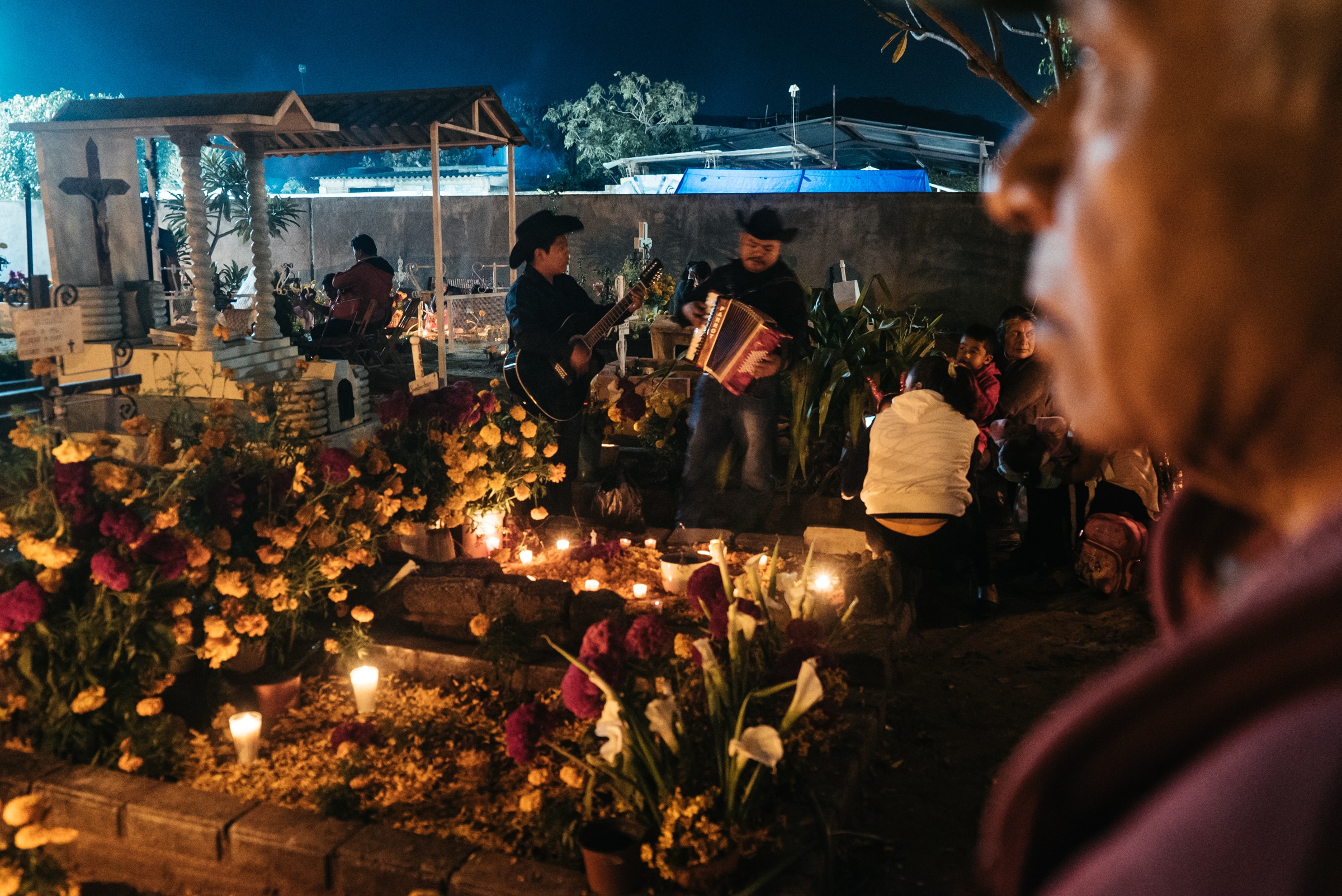 The ancient Roman emperor Marcus Aurelius once said, “it is not death that a man should fear, but he should fear never beginning to live.” By wearing no more sad faces on the graves, and celebrating life with the dead Mexicans seem to have captured the essence of this quote. 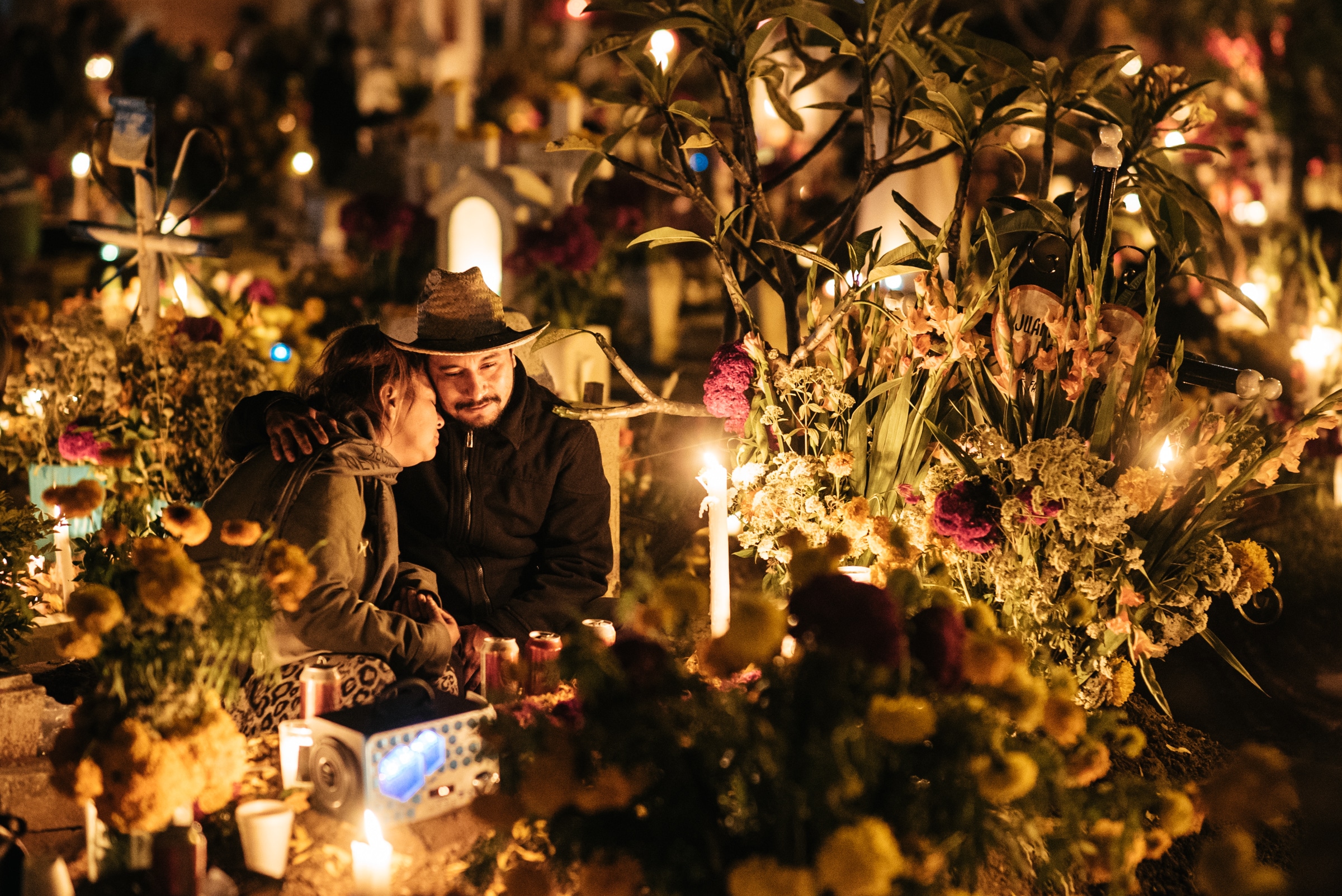