“My name is Daulat Amin. Perhaps God wanted me to become the guardian (Amin) of a treasure (Daulat) and what bigger treasure than the knowledge (Ilm)?”

Born in 1945, Daulat Amin was the first matriculate teacher from Shimshal. When Daulat was young, his family suffered an economic shock after their 300 goats and sheep, and dozens of yaks got swept away in a landslide.

“We saw poverty, but God was testing us. What I lost in economic terms, I gained spiritually.”

His father sent him to Gulmit from where he got his primary education. His teacher not only gave him school education but also passed on spiritual wisdom. Amongst other languages, he also taught him Arabic and Persian.

Daulat was in 3rd grade when he had the honour to lead congregational prayers in Jamaat Khana (a place of worship). “My ancestor Qurban Ali brought Shiite Ismailism to this region 900 years ago.”

Daulat passed his matriculation exam from Gilgit in 1966 and soon afterwards got commissioned in the army, where he could have received a monthly salary of 1,000 PKR as a Lieutenant.

He went to the Mir of Hunza to receive his domicile, who said to him, “I am glad that you are the first person from Shimshal to have passed matriculation. But if you choose to become an officer, whereas your entire village remains illiterate, it would be unfortunate. If you serve your people by teaching, God will be happy with you.” 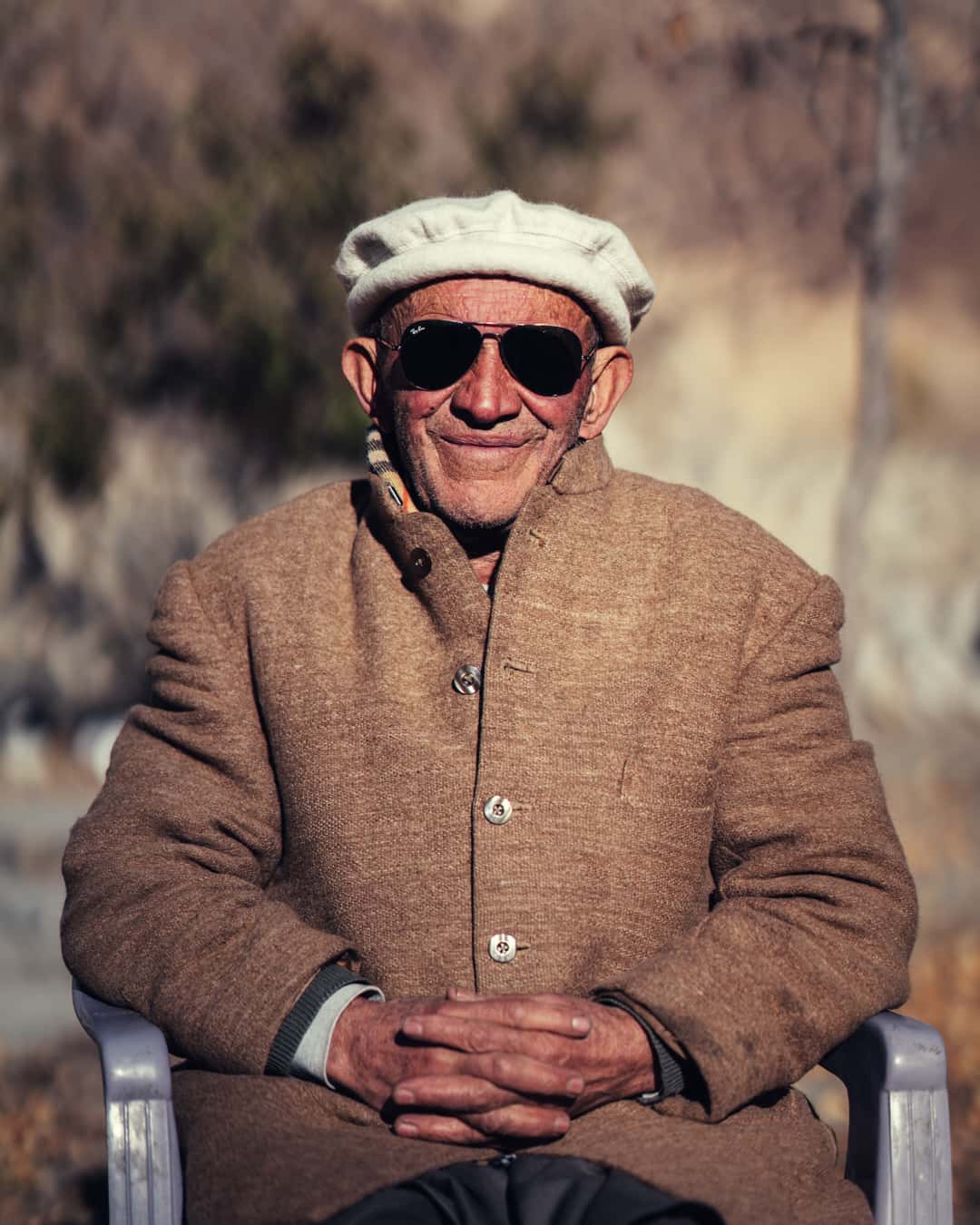 Daulat Amin didn’t hesitate for a second to leave 1,000 PKR salary and future army rank stars and instead went back to Shimshal as a primary school teacher for 20 PKR/month.

His class fellows, who became Majors and Commodores, used to taunt him and boast about the perks they used to get in the form of protocol and servants. “When they retired, nobody saluted them afterwards, but even after decades my students still stand up for me in respect.”

After seeing his performance, the Mir of Hunza raised Daulat Amin’s salary to 40 PKR/month. He was the only teacher for 60 students. He taught them all the subjects for 8 hours a day and made teaching meaningful with spiritual lessons.

“The purpose of life is to differentiate between the good and the bad. I wanted my pupils to become good human beings.”

Impressed by the results, more families started sending their children to school. But many unusual challenges made teaching difficult for Daulat Amin.

“We had a limited number of books that children used to share, but no copies, pens, and ink. Students practised writing on Takhtis (wooden slates). I used to make ink from black clay. Every day I would pray to God in Jamaat Khana to give me strength so I could bring light to my people.”

Back in those days, there was no road between Passu and Shimshal. People had to cross the river 45 times. Some of them chose not to wear Shalwar (trousers) during the river crossings to avoid their clothes from getting wet. In the evening, they would collect wood and make fire. When the ground became warm, they would sleep on it. It was only possible to cross the river between 15th October and 15th May. At other times, the water level was too high, and they had to travel on a mountainous trail through Qaroon Pir that took them a week to reach Passu.

“It wasn’t feasible for us to carry school supplies on this journey. Those were tough times.”

Meanwhile, whether it was a wedding or a funeral in Shimshal, Daulat Amin appealed to his village fellows to donate for a school building and land.

During Zia’s government, a helicopter landed here with General Aslam Shah in it. Daulat Amin welcomed him and requested for a middle school.

His wish got granted. 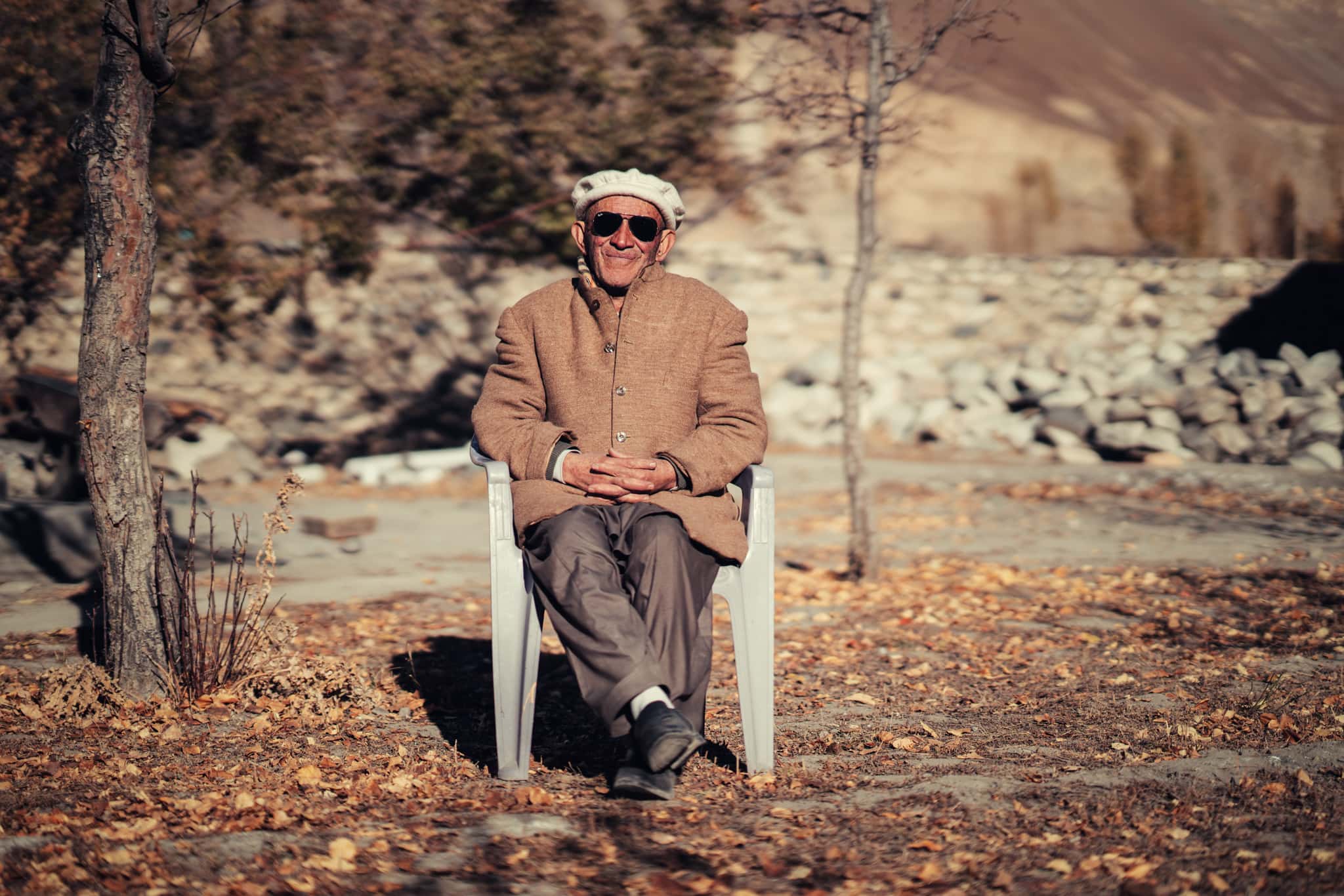 In 1967, he received Air Marshal Nur Khan who landed in Shimshal on a chopper. The night before, Daulat Amin wrote a welcome address in which he noted the community’s problems. He practised his speech in front of President General Ayub Khan’s portrait in the house. In the morning, he received the Air Marshal before anyone else arrived.

“I gave him the letter I had written. He showed it to the political agent saying, ‘look at his age and his writing style.'”

The government accepted their demands and created a pony track reducing their journey to Passu to only two days.

In 1977, General Zia declared martial law in Pakistan. Three years later, he visited Hunza to meet local communities. Shimshalis requested him for a jeepable road to Passu. He asked how much it would cost to construct the road?

“What is the population of Shimshal?”

“Why cannot we relocate them somewhere else? It would be much cheaper.”

When Daulat Amin heard this, he became furious. He stood up, apologized for the interruption and said, “Sir, our ancestors have lived here for 800 years, and we are going to live here for another 800 years. No matter what happens, we will not let our next generations get labelled as migrants.”

General Zia replied, “I will think about it.”

Seeing no hope, the Shimshal Community decided to take matters into their own hands. With the assistance of Aga Khan Rural Support Program, district government and development agencies, it took them eighteen years to construct a road link between Shimshal and Passu. Around 150–250 Shimshalis volunteered for the construction.

In 2003, a jeep appeared in Shimshal with a local Issa Karim on the driver’s seat. The entire village had gathered by the river to give a warm welcome. People had brought pots filled with milk. Everyone was in tears.

“Our village remained isolated for 800 years. We felt lucky to have access to the outer world. We poured milk on the vehicle as an offering.”

Though their journey to Passu now takes only three hours, the jeep track remains one of the most dangerous roads to drive. Besides, it is poorly maintained. Eight workers, equipped with nothing but shovels, have an impossible task to look after a 50-km long unpaved road that is vulnerable to landslides, floods, and heavy snowfall.

Daulat Amin was born to serve and give the light of knowledge to his people, which he did very well for many years. He long campaigned for a pony track and road link with Passu. It was due to his efforts that Shimshal got a middle school. As the first teacher from Shimshal, Daulat taught and inspired generations of children to dream big. He was a great proponent of girls’ education. He has around 800 students, some of whom have achieved high ranks.

“The knowledge is incomplete without faith. Recognition of God, gratitude to the Divine, and responsibility towards others are the most important things to become successful.”

Daulat Amin retired many years ago, but a few of his disciples are still keeping the candle of knowledge burning. Nowadays he sits outside his house in crisp sunshine and watches school children in colourful clothes run around like butterflies fluttering about. Listening to their cheerful voices echo in the valley, seeing Issa Karim’s Landcruiser approach Shimshal with a cloud of dust behind, and knowing that his people are still fighting it out to keep their ancestral lands alive—all must bring a lot of joy to him.

And God must be happy with him too, for His man indeed turned out to be a guardian (Amin) of the treasure (Daulat) of knowledge.