In Mocoa, Colombia I went through a similar experience. Deep in the lush green jungle, a river meanders through the natural reserve area forming many waterfalls on its course. One of such waterfalls was in front me. A golden pool shimmered in the afternoon light. A canopy of trees covered it from all sides. I stood there looking at it with a broad smile on my face. I knew if I went inside the pool, it would be hard for me to come out. 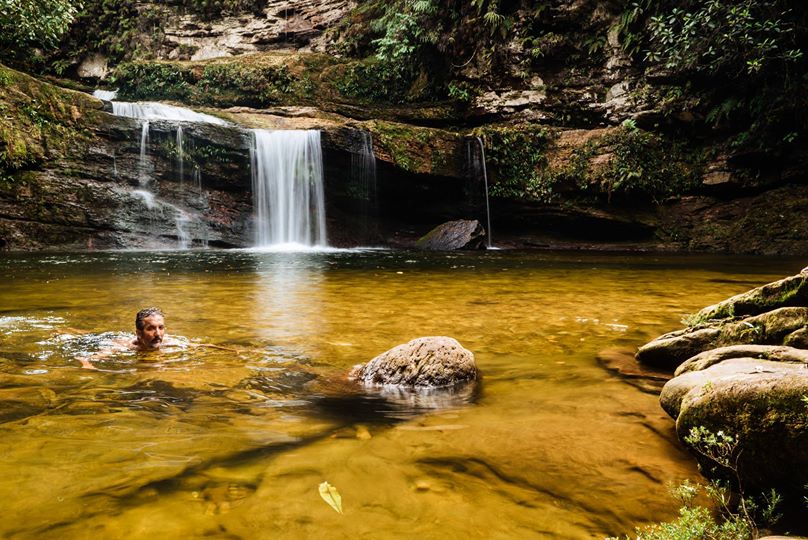 I took a couple of deep breaths. The air smelled foliage and damp earth. It had rained just a while ago. The water was dripping from the leaves onto my shirt which was already soaked wet in sweat. The birds were chirping but there was one particular bird sound from the trees which was as if someone was constantly taking pictures.

Sometimes later, I found myself wading in the pool in a state of oblivion. The pool was like a polished mirror of gold. My hands skimmed the cool silky water, but it was not gold. Instead, the water looked as if I was holding thousand melted diamonds in my hands.

I sank into the pool and closed my eyes. Even inside the water, I could hear the cascading waterfall gushing through the rocks and splashing into the pool. The white noise of the waterfall lured me into sleep.

When I opened my eyes, I found a golden leaf swimming next to me. In the clear water, it seemed as though it was floating in the air.

How long will this beautiful waterfall last?

Nature has blessed us with so many resources and beauty but look, what we have done to it? The chest of the earth is full of scars. We have polluted air, littered rivers and seas, cut forests and erased many animal species forever. Glaciers are melting, and oceans are rising. But instead of doing something about it, we are instead aiming for a head-on collision by building arsenals of weapons of mass destruction.

The population on the earth is rising rapidly, and there is a much more burden on earth than before, but we continue to waste a lot more than what we need. We fail to recognize that although earth’s natural resources are abundant but they are not infinite. If we keep wasting these precious resources and the way we are destroying nature ruthlessly, soon we all will be doomed. This is our home and we are all responsible for it, otherwise, we will be like that leaf which turned yellow after getting separated from its tree; the one who came to tell me its story.