A son writes to his dad after seventeen years! Recalls his painful circumcision. Reminisces about the mandarin juice he used to drink at dad’s shop in winters. Remembers his first bicycle accident. The verses that dad wrote to him. The picture of an unknown railway bridge on dad’s t-shirt. And how much of mom’s jewelry was sold to pay his university fee.

For English version, scroll down! 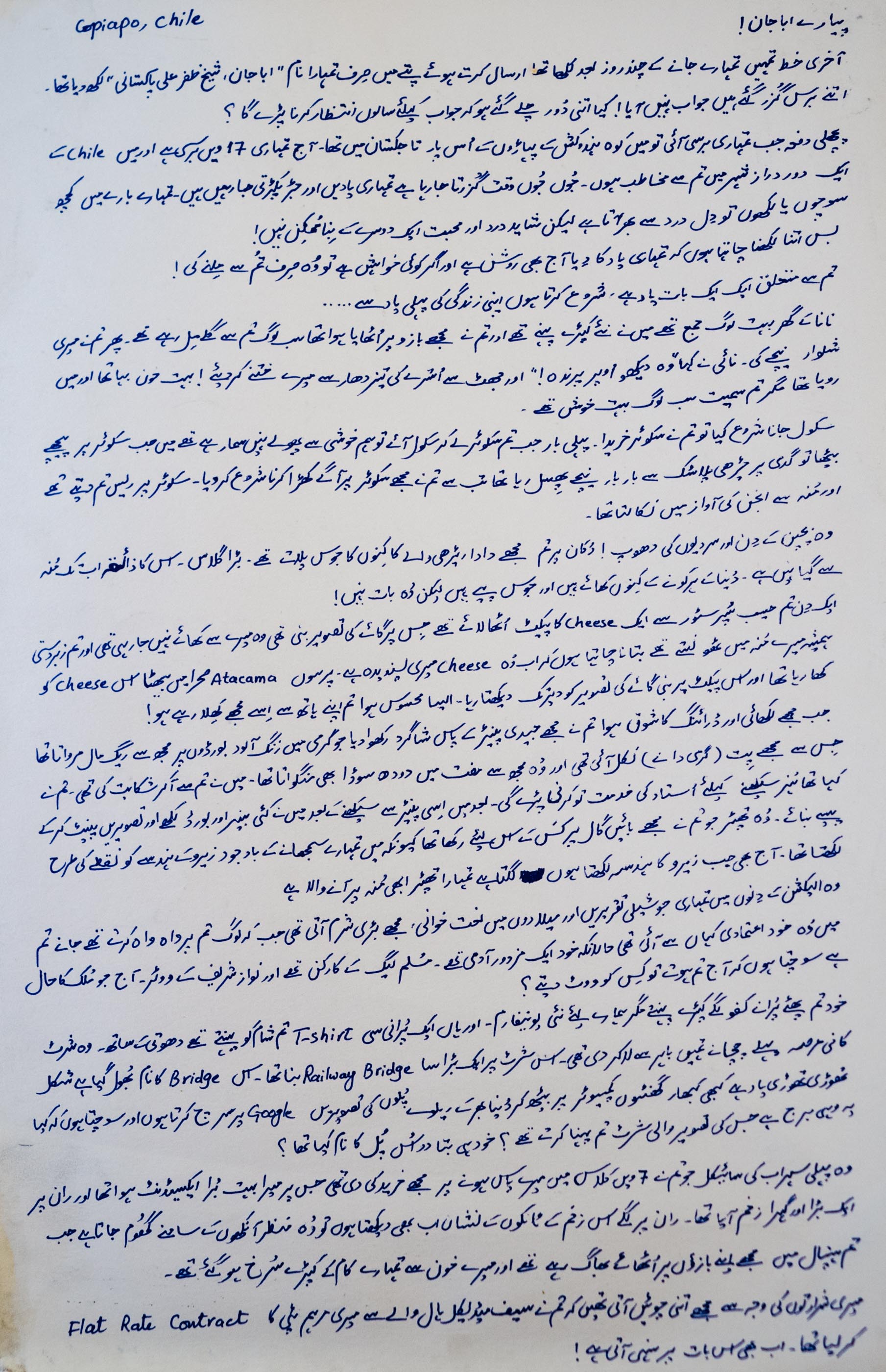 The last time I wrote to you was shortly after your death. On the envelope, I had just written your name “Dear dad, Sheikh Zaffar Ali Pakistani” and dropped it in the letterbox. So many years have gone by and I have not heard back from you. Have you gone so far that I have to wait for years to get a reply from you?

Last year at your death anniversary I was on the other side of the Hindu Kush range, in Tajikistan. And today, 17 years to the day that you left, I am writing to you, from a remote city of Chile.

With the passage of time, your memories have gained roots. My heart fills with pain, thinking and writing about you. But perhaps, love and pain are inseparable. I just want to write to you, to tell you that your memories are still alive. If there is only one wish; that is to meet you. I remember everything about you.

Let’s begin with the earliest memory of my life!

The day you came to pick me up from school on your new scooter. I couldn’t contain my happiness. The first time I sat on a scooter, I slipped from the polyethene seat cover. From then onwards, you used to make me stand in front of you on the scooter. You’d give the throttle and I would make the engine sounds.

Those days of childhood, and the winter sun; you would buy me Kinnow (Mandarin) juice from Dada Rehri Wala (cart owner). The large glass. Decades have gone by but its taste is still in my mouth. I have travelled the world, but no juice in the world could compare to that Kinnow juice.

And the day you brought me a pack of cheese from the store. It had a picture of a cow on it. Happy Cow cheese; I couldn’t eat it and you would force it down my throat. I want you to know that it is my favourite now. Just yesterday I bought a pack. Sitting in the middle of nowhere in the Atacama desert, I was eating cheese and kept looking at the picture of the cow on the pack. For a moment, I felt that you were feeding me with your own hand.

When I became interested in writing and drawing, you got me an apprenticeship at Jedi painter’s. He would make me sandpaper rusted metallic boards in summer afternoons; I’d get rashes from the heat. He would make me get him milk n soda for him too. When I complained to you, you said; “to learn a skill, one must serve the teacher”. And later, I would earn by making many banners and boards with the skill I learned from that painter. Anytime I write the digit zero, I almost wait for a slap from you. That slap you delivered on my left cheek; because I could not learn how to properly write the digit zero, despite your many lessons.

Those fiery speeches during election rallies, and your Naat-Khwani in Milaads; I used to be so embarrassed when people would cheer you on. Now I wonder: “Where did you get all that confidence from?” You were a simple laborer, a worker and a voter for PMLN. I look at the condition of the country today, and wonder who would you have voted for now?

That first “Sohrab” cycle that you bought for me when I was in the 7th class. The one I had an accident on. That big gash on my thigh; whenever I look at that stitches on the scar, I can see you running around the hospital with me in your arms, your clothes stained red with my blood. To this day, I laugh when I think that you had to negotiate a “flat monthly rate” with Saif Medical Hall for my treatment, because of my never-ending injuries, and insatiable mischief.

After my secret trips from Layyah to Multan and then Layyah to Lahore, you had said; “you should have told me, I would have gotten you a newspaper coverage.” You were friends with Abdul Hakeem Shauq from Nawai-Thal Layyah. I wonder if you were still here, what would have you done when I reached Pakistan from Germany on a bicycle?

When I topped my B.Sc. exams in a college in Multan, and there was a press release in the Jung newspaper; you kept a cutting with you, and would proudly show it to everyone who came to the shop.

I only bunked off school once in my life, but such was the effect of your beating, shoes and sticks, that I only ever left after completing my Ph.D.

And those last few days, when you were in the hospital, in a subconscious state you spoke to me, “My son studies in BZ university, he is doing his masters in computer sciences, call him, I have to meet him before I die”. Your son still cries like a child every time he thinks of that moment.

That house, the one you built yourself, working along the labourers in the sun. Working so hard that you contracted hepatitis. The disease that took you away from us. You used to read a verse:

“The ceiling dripped but I’d still fall asleep, I cried so much in the new home for the old one”

And when you had to go and sell mum’s jewellery to pay for my university tuition fees; you sent me a letter in Multan due to my long absence from home:

“Those studying in the cities have forgotten, how much jewellery their mums sold”.


I have not forgotten dad. Mum sold 4 gold bangles for my university admission!

You travelled to Quetta from Layyah on a scooter. So many nights filled with you narrating the stories of your adventure to us. As a tribute to that adventure, I have started an adventure of my own. I’ll tell you stories when we meet.

Dad, I keep thinking, what would you think if you were here? I talk to myself as if I were you… believing that I am consulting you. Without you, there is no one who cares or who can guide me.

Without you, I am afraid of this cruel world. I feel unsafe. Your daughter; who you gave away in tears; it was on that wedding that I saw you cry for the first time. Some months ago her husband and his family dragged her into the street and beat her. And I could not do anything. If you were here, you would have taken on them and the rest of world. I, your son… I am so weak. Forgive me if you can!

How is the mum? Give her my regards. As soon as the journey of my life is over I will come to see you both. There’s so much to talk about…

P.S. This time, I am writing the complete address on the envelope (Dear dad c/o God) with the faith that this letter will reach you for sure.