The tarmac on the Panamerican Highway melted under my tyres in the tropical heat. I struggled to keep the bicycle on the wide shoulder of the road which was dotted by dead frogs who were baked dry in the intense sun and had been flattened out by the traffic. These paper thin frogs flew in the air like dry leaves when the trucks passed by. 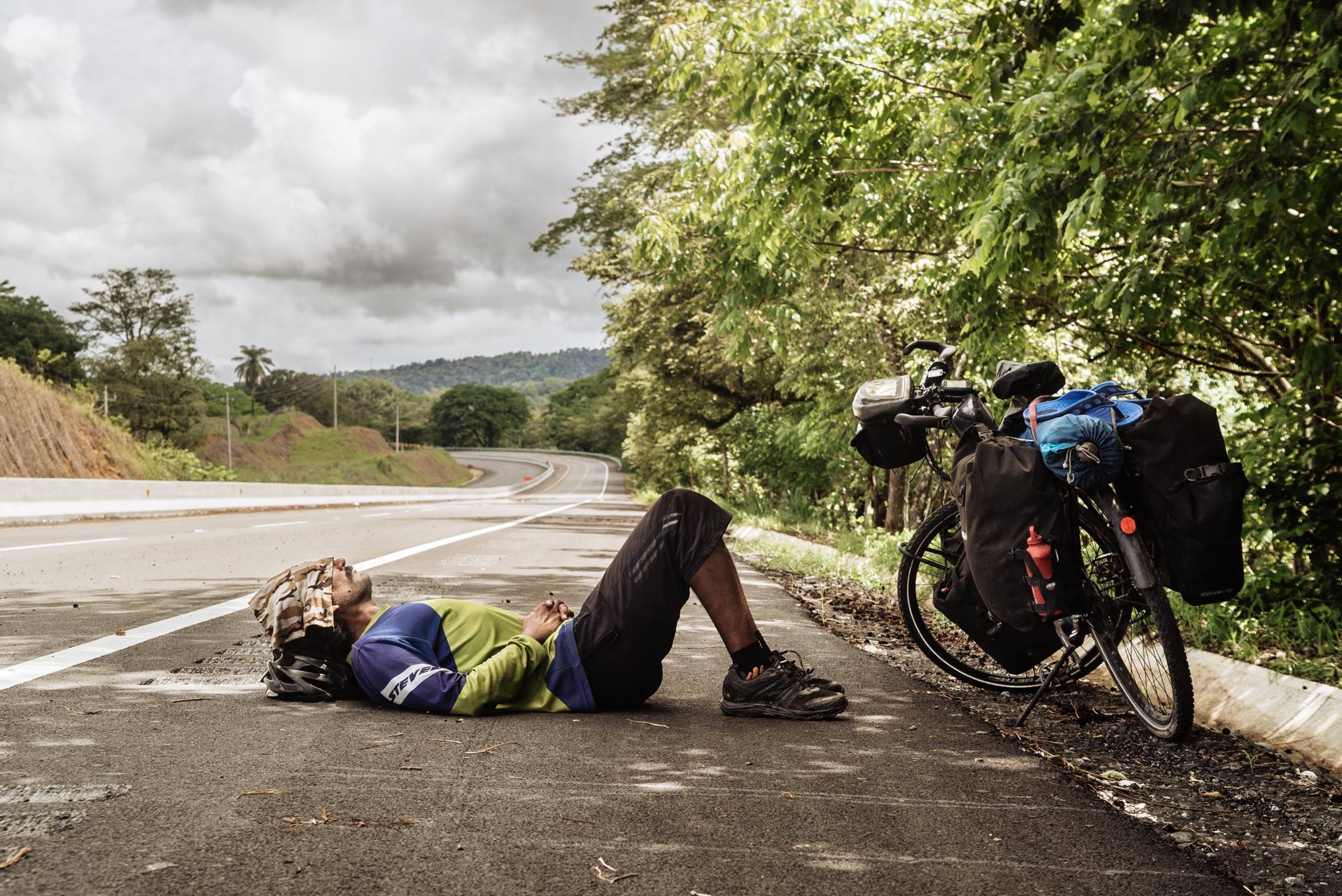 It was hard for me to keep the eyes open, so I would close them every now and then and count seconds to see how long I could go with my eyes closed; about 10 seconds before I was out of my lane.

I found some shade under trees and lied down on the asphalt which was hot like a frying pan. My shirt was drenched in sweat but my throat was as dry as the road I slept on. As my tongue licked off the sweat drops from my moustaches I tasted a certain sweetness in my own salt. Despite cycling hard I did not have a meal for about 24 hours on this lonely stretch of the road, except for eating a few mangoes which I had found under a tree where I was camping last night. The air was so still that the trees appeared like a paused scene from a film. It smelt musty with old fallen leaves. There was a hint of a smell of burnt oil in the kitchen which reminded me of a shop in Layyah where I used to buy Samosas upon returning from school.

My eyes began to close but in my head, I was still counting 1,2,3…..In the trees, a bird tweeted and then became silent. There was an occasional sound of seed pods dropping from the trees on the damp forest floor, and roaring of a truck in the distance making its way on an uphill.

Looking through a glass window in the double swing door, I saw some feet moving anxiously under the blue curtains. The door swung open and a body on a stretcher was taken out. A rural man in stained clothes came out weeping out loud. Everyone gathered around him. As I watched this, I felt a hand on my shoulder. A man, wearing a white coat and a stethoscope around his neck, spoke to me, “you can go inside!” I walked into the large room with the disinfectant smell and pulled the curtain. She was lying on the bed with drips attached to her. A heart-rate monitor in the corner blipped and beeped. I held her hand in my both hands. She slowly opened her eyes. Behind the oxygen mask, she mumbled something, and then I saw a stream of tears rolling from my eyes. As I tried to stand up and wipe off tears from her eyes, I saw myself handcuffed to the bed. The floodwaters broke the dam and swept away everything in its way.

The squeaking of a bird woke me up. Above me were a small bird and a raptor engaged in a fight. But it was the raptor, many times larger than its counterpart, which was trying to escape. As I still lied on the tarmac and watched all this, I saw a young bird in the claws of the raptor. The mother bird made a lot of noise and kept chasing but the raptor managed to speed away. She eventually gave up and sat on a branch of a tree; alone—restless—panting–as she looked left and right.

In that moment, her world and my world were not very different!