On 18th March, the sun rose from the horizon like a fireball at Islamabad airport. Team Annapurna boarded the Emirates Flight EK 613. What could have been a two-hour journey to Kathmandu took us 12 hours, including a 5-hour layover in Dubai. After passing through a countless number of security checkpoints at three airports, we arrived in Kathmandu. Here Miss Dawa Futi Sherpa of Imagine Nepal Expeditions Ltd greeted us by presenting ceremonial scarves signifying compassion. The next day, we visited the Pakistani Embassy and met the ambassador there.

We spent only one day in Kathmandu, but a productive one. The team bought the climbing gear, shoes, crampons, gloves, and many other items. We met legendary climbers, Mingma G. (@mingma.g), who recently did the K2 in winter, and Chhang Dawa Sherpa (@14dawa), the youngest mountaineer till 2019 to summit fourteen highest peaks. Mingma G. hosted us at dinner. I ate and drank whatever he threw at me on the condition that he would let me photograph him at the Annapurna basecamp. 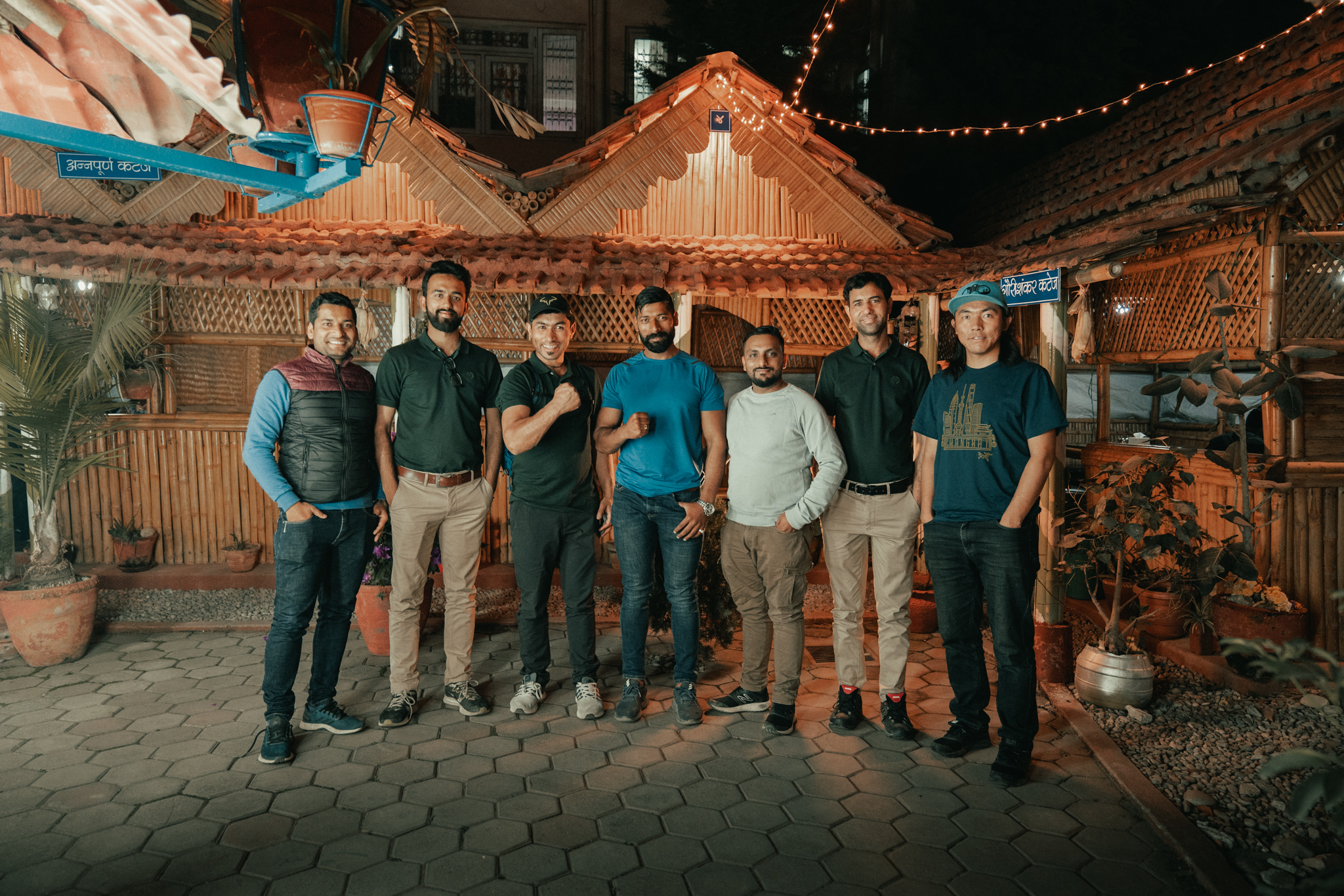 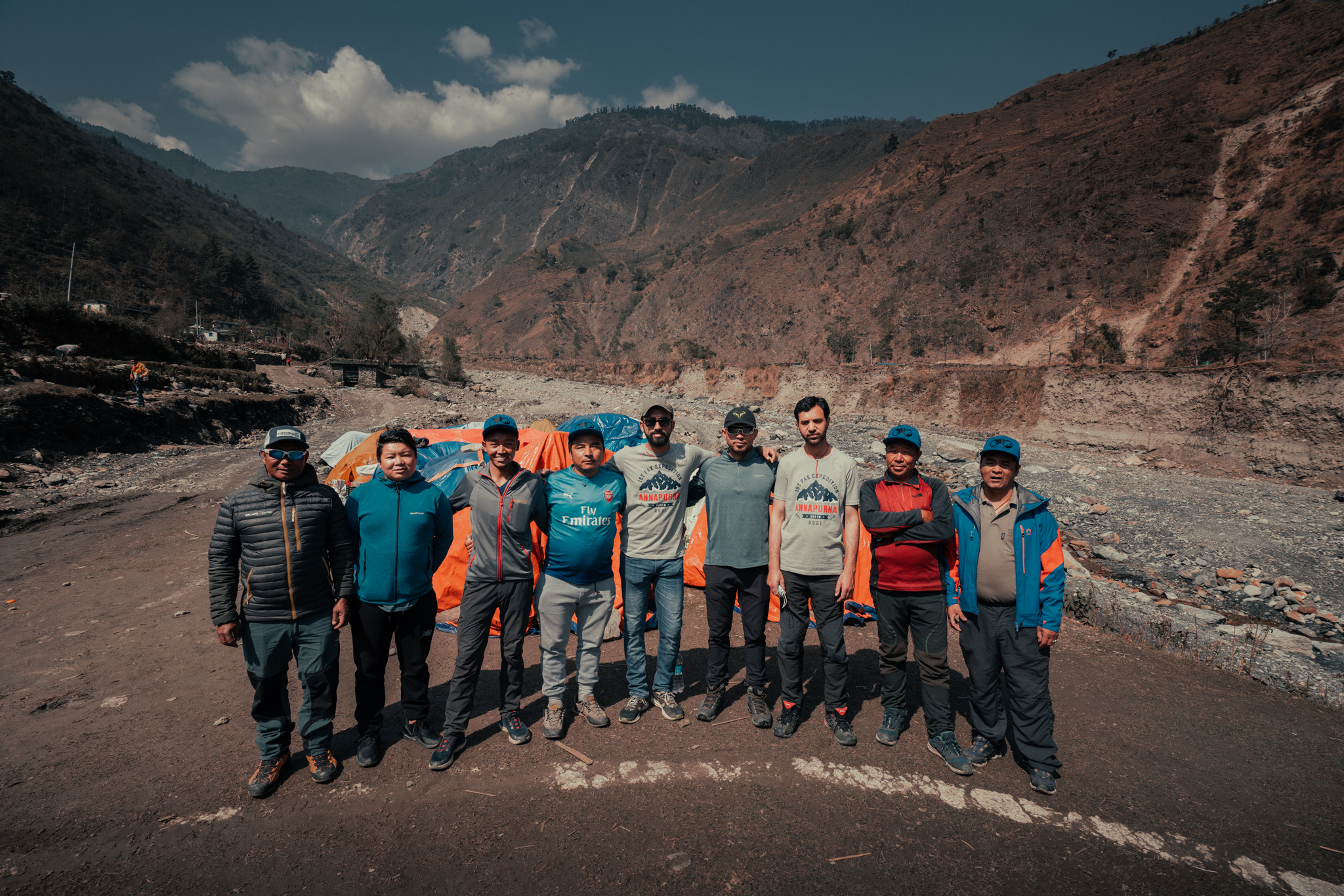 From Kathmandu, we had a twenty-minute flight to Pokhara, a lively town surrounded by mountains. One can see three 8,000-metre peaks, Dhaulagiri, Annapurna, and Manaslu, from the city. Right after checking in at the hotel, we all jumped into the swimming pool. It turns out as Joshi is as good on the mountain as bad he is in the water. 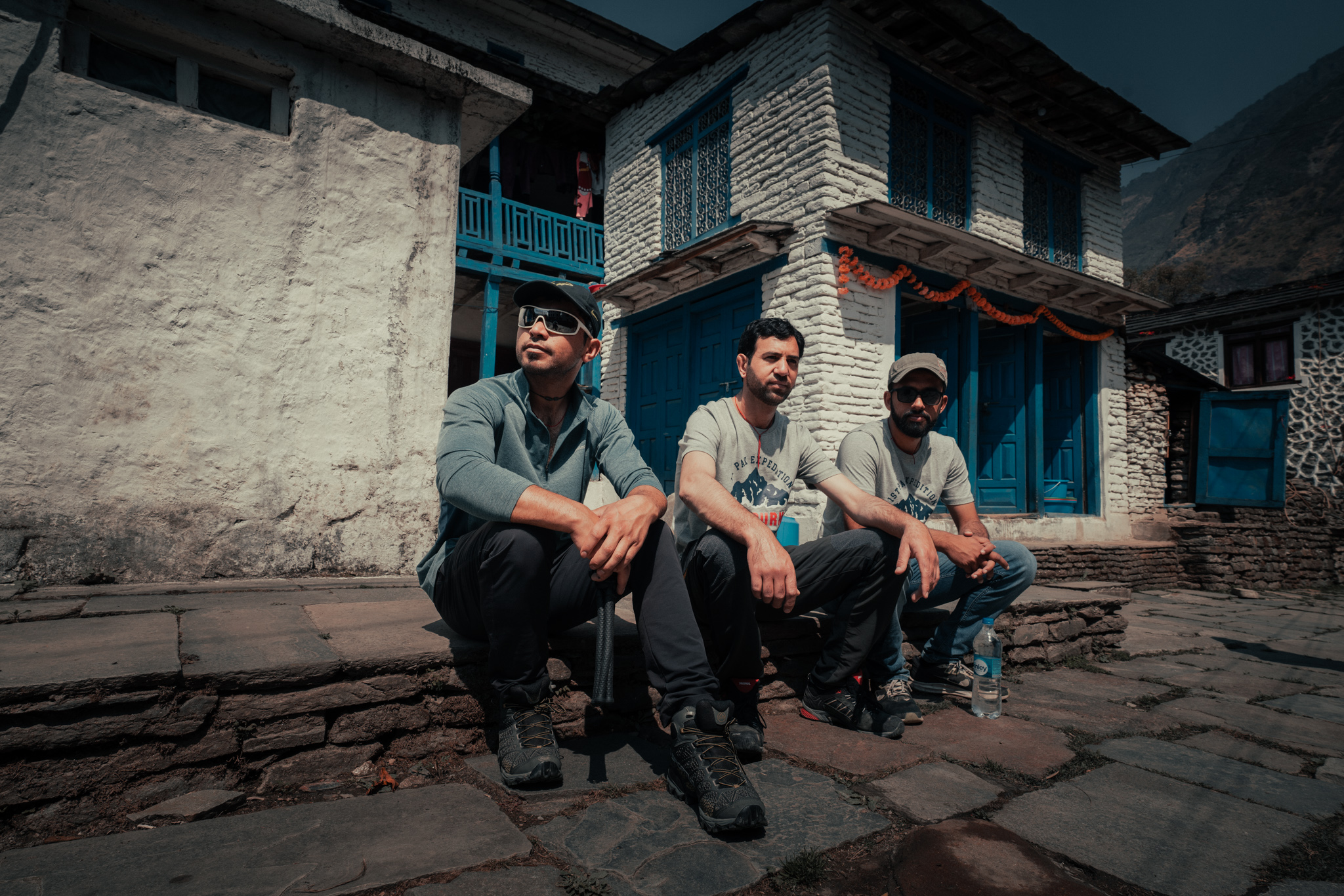 From Pokhara, we had a road trip to Dana village. The road passed through tiny villages where local women wearing traditional dresses worked in fields. The last part of the Jomsom Sadak road was badly damaged due to landslides. We would have given birth if we were pregnant.

We are now staying in Dana. It’s the hometown of Nirmal Purja (@nimsdai), who made a world record by summiting all fourteen 8000 peaks in six months. He was part of the 10-member Nepali team that summited K2 in winter about nine weeks ago.

Today we met the kitchen crew, who will be setting up and running the Annapurna basecamp and climbing sherpas. From how humble, softspoken and lean they are, one wouldn’t believe some of them have summitted eight to ten world’s highest peaks and climbed Mt Everest eight times. If there is one thing one can learn from them, it is humility. 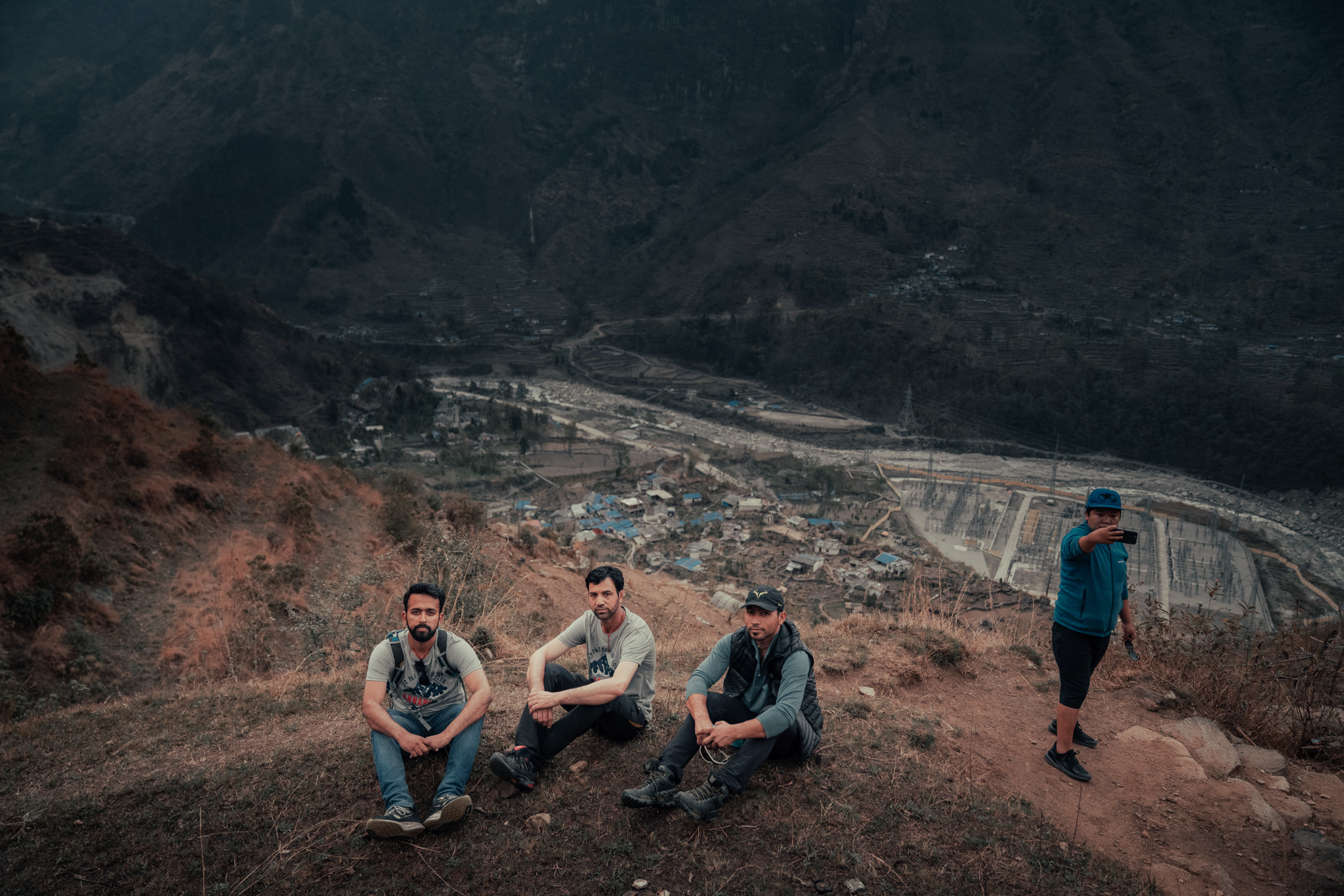 From Dana, we will take a 10-minute heli flight to Annapurna basecamp. Tons of luggage awaits at the helipad, camps, fuel, food, equipment, etc. All this is going to the base camp. There will be seven expedition teams on Annapurna this year. As I write these lines, the heli has made four rounds so far. We will fly to the basecamp tomorrow and will keep you updated from there. 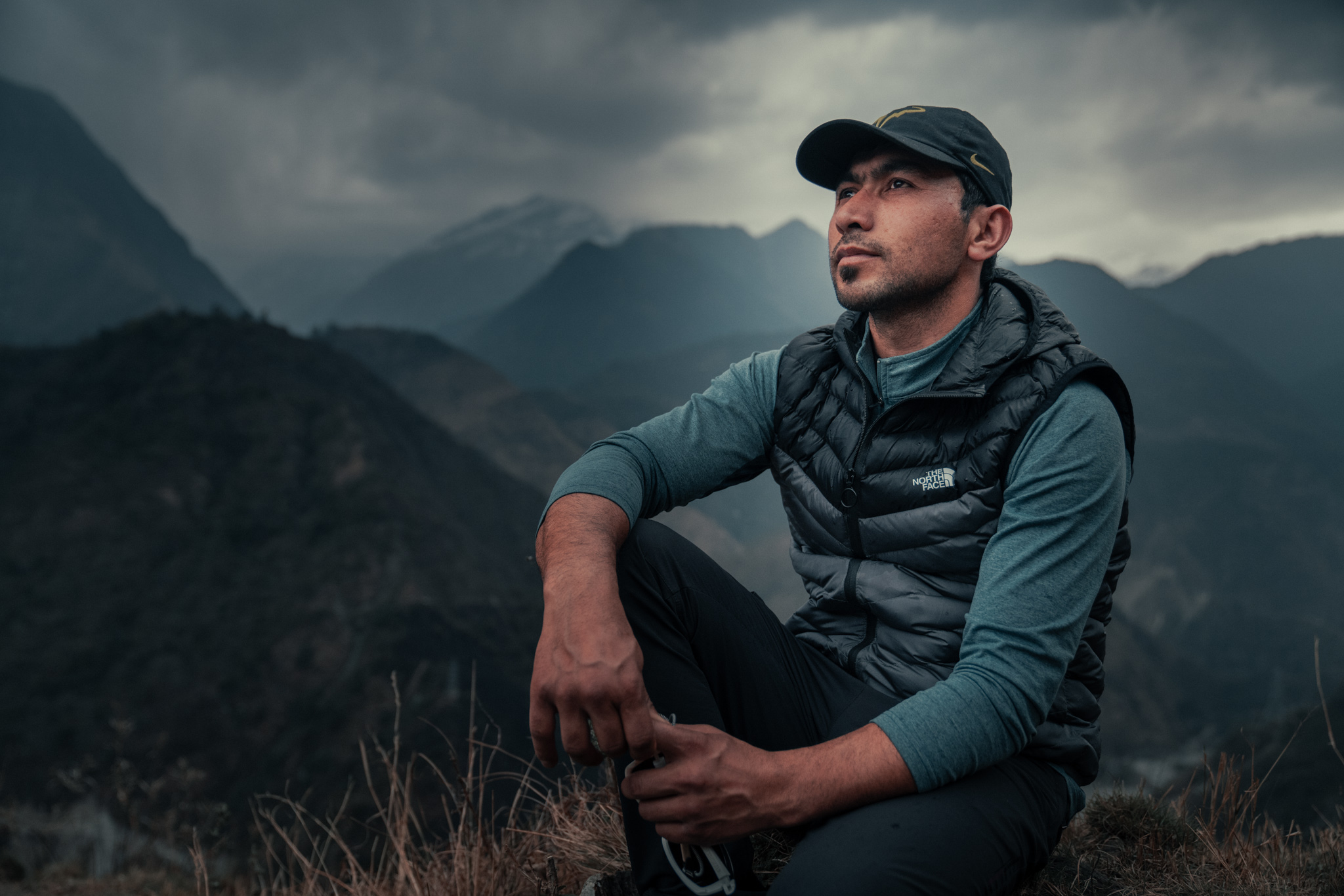 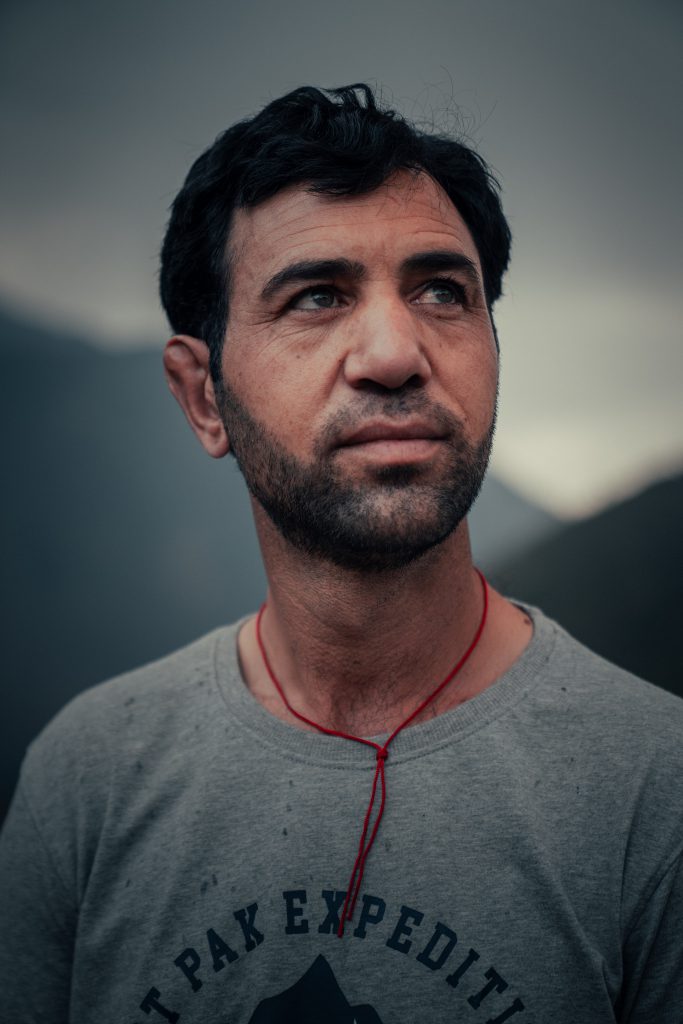 Our team is in great spirit. Sirbaz and Joshi are looking forward to their climb. Our expedition manager (@saad.munawar.1) has kept things under control and has been entertaining so far, whereas I am waiting to unleash my camera equipment when we reach the basecamp.

We would also like to thank @thurayatelecom in the UAE and Rockville Technologies for providing us with a Thuraya internet device that we will be using to post live updates and stories.